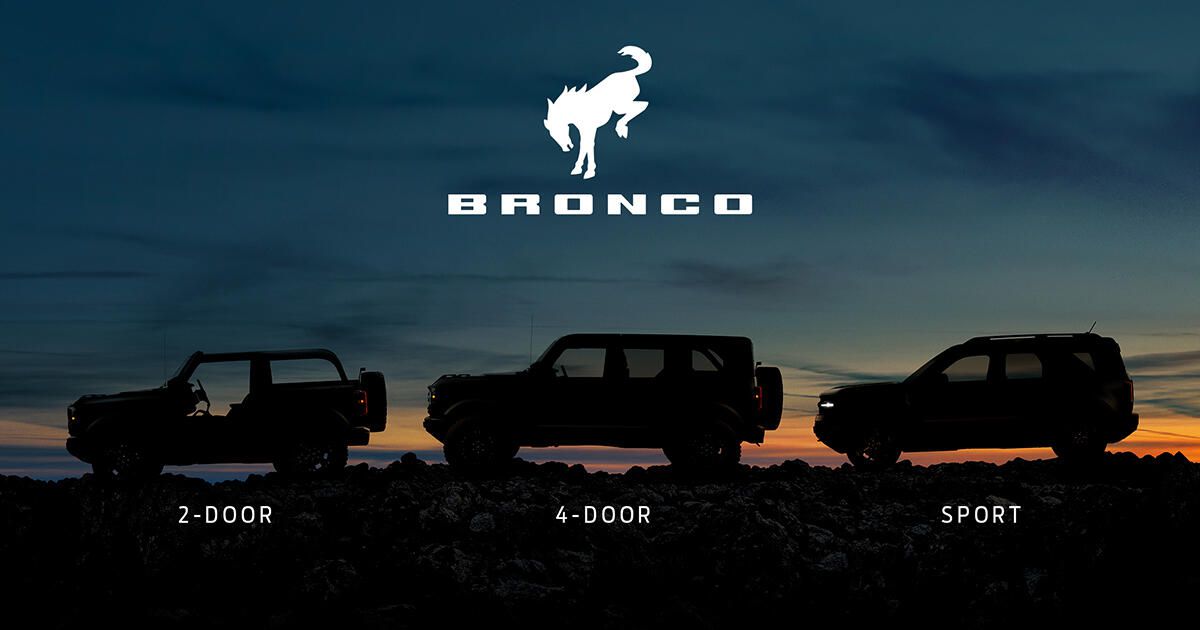 2021 Ford Bronco, Bronco Sport teased with new picture and video ahead of reveal

In just seven days the Ford Bronco will return, and the Bronco Sport will debut along with it. In the run up to the big reveal on July 13, Ford’s social crew is having a ball tossing out teasers for the off-road SUV left and right. Last week, we got a taste of what the 2021 Bronco will sound like and had our first official look at its design, and on Monday Ford released a new teaser image showing the profile of all three Bronco models, as well as a video that gives us glimpses of the new SUVs in action.

In the new side shot we can see both two- and four-door versions of the “big” Bronco, the former with the doors and roof removed, as well as the smaller Bronco Sport crossover. We’ve already seen leaked photos of the Bronco and Bronco Sport sans camo; this further confirms that those photos were real. Fans of the original should be excited, as the Bronco has a blocky profile with short overhangs, a rear-mounted spare tire and some retro detailing. The Bronco Sport looks pretty chunky as well, with some clear design cues carried over from its larger sibling.

The new video, which you can see above, shows both the Bronco and Bronco Sport blasting through different off-road terrain. It’s our best official look yet at the design of the Bronco, especially the front and rear ends. We’ve already seen the grille and headlight setups, but now we can see a thick front bumper with integrated fog lights and tow hooks, and the flat hood has interesting ridges along the side edges. The taillights are shaped like a “B” — B for Bronco, obviously — and the tailgate will open to the side. Beadlock-look wheels stick prominently out from the large fender flares.

Ford also announced Monday that owners of the Bronco will get access to “Off-Roadeo” driving schools that are being established in different parts of the US. Ford says all Bronco models will boast “Built Wild” capability, essentially an analog to Jeep’s Trail Rated badge, and they’ll come with standard four-wheel drive.

Last Tuesday, Ford posted three photos to the official Ford Bronco Instagram account. The middle photo shows a classic Bronco, while the sides mash up the old-school SUV and the upcoming model. It wasn’t a lot, but we got a look at its retro, round headlights and the butch profile fans know and love.

On Wednesday, the automaker followed up with a quick video showing the Bronco’s front end basically without any camouflage. On Thursday, Ford showed off the rear quarter panel, revealing large fender flares, knobby tires and a Wrangler-like taillight. It seems like this could be a near-daily occurrence until the SUV’s full reveal.

We’ll keep an eye out for any more teasers, but there are only seven more sleeps until Bronco day. Ford is revealing the Broncos across multiple TV stations simultaneously thanks to a deal with Disney. Reservations will open the same day for a refundable $100 deposit.

Climb in the driver’s seat for the latest car news and reviews, delivered to your inbox twice weekly.

The Ford Bronco is going to Baja