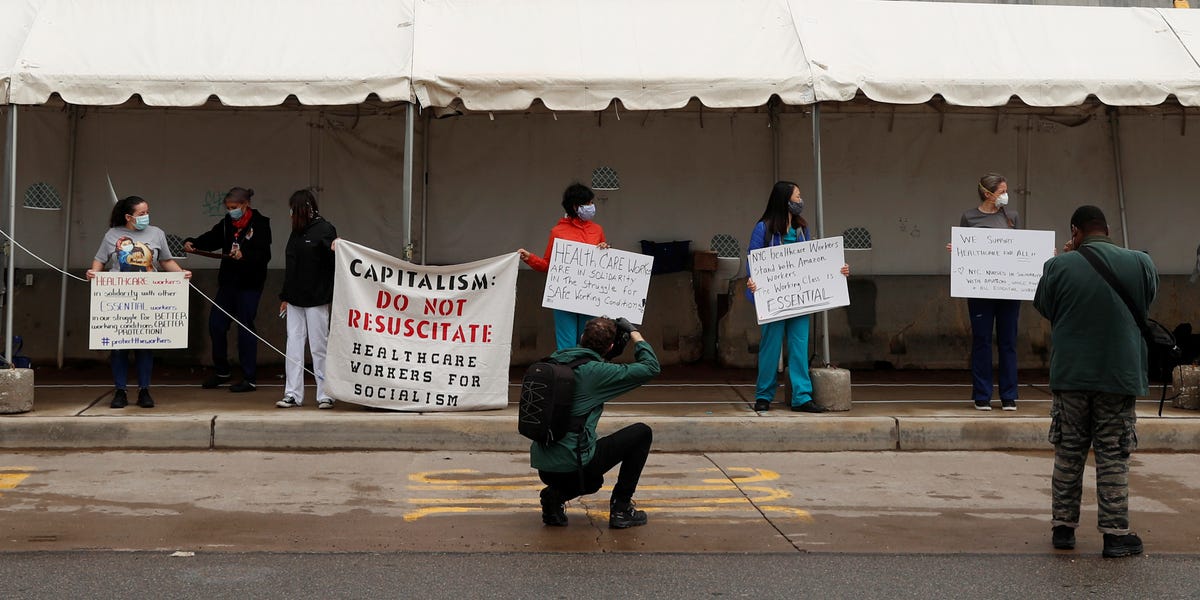 Amazon’s coronavirus testing strategy could be a game changer

Researchers at Morgan Stanley just released a new report on how Amazon could set up coronavirus testing stations and ultimately change the way it does business in response to the pandemic.

In April, CEO Jeff Bezos announced that Amazon was building a lab to test employees for the virus. Then, earlier this month, Amazon confirmed to Business Insider’s Charles Davis that it had launched a pilot program to test some warehouse employees for COVID-19, the disease caused by the novel coronavirus.

Morgan Stanley says Amazon’s ambition is to “create COVID-19 testing stations that Amazon employees can pass through on a daily basis.” Doing so would improve operations at fulfillment centers, give Amazon a competitive advantage against e-commerce rivals, and potentially let it share or license the technology to others.

Amazon is taking steps to protect its employees after outbreaks in its warehouses sickened workers. Protests have erupted about safety conditions at the company. Bezos recently said the company would spend $4 billion on coronavirus-related expenses, including increased protections for workers, as CBS 60 Minutes reported on Sunday.

The company could spend $1 billion on the testing effort alone, according to Morgan Stanley.

Several barriers stand in the way of Amazon’s testing goal, like the need for capital investment and the difficulty of deploying rapid test kits at scale, according to Morgan Stanley. But the payoff could be substantial, as the retail giant moves towards a more “Covid-free” reality, the researchers said.

Goodwill, efficiency, and protection from competition

For starters, Amazon could share the technology it develops to set up the scalable testing stations with cities, countries, and governments, according to Morgan Stanley.

“The potential goodwill created through this cannot be valued and in a world where tech regulation is a recurring topic, could be a game changer,” the analysts wrote.

Alternatively Amazon could license the testing methods to other companies, as airports, hotels, cruises, and movie theaters look to set up testing programs of their own, according to Morgan Stanley.

More straightforward benefits from the initiative include efficiency gained in day-to-day operations.

Fulfillment centers and warehouse costs, for instance, recently made up about half of Amazon’s gross profit, according to Morgan Stanley. But they’ve been subject to safety precautions like social distancing that slow things down, the analysts said.

“But if every employee could be tested when they walk through the door, Amazon’s warehouse and logistics network could return to a more ‘normal’ operating procedure,” which would lead to gains in 2021, Morgan Stanley wrote in the note.

Safer working environments could also make the company even more expensive to compete against, according to the firm. As consumers and third-party sellers alike place a premium on sterile packages and products, testing across Amazon’s network could help protect it from competitors that can’t do the same.

The firm believes that Amazon wants to invest in a saliva test that requires little handing and produces fast results, like antigen tests or those that use gene-editing technology.

What’s more is that the supply chain for producing massive quantities of kits is complex, and there remain issues with testing accuracy, according to the firm.