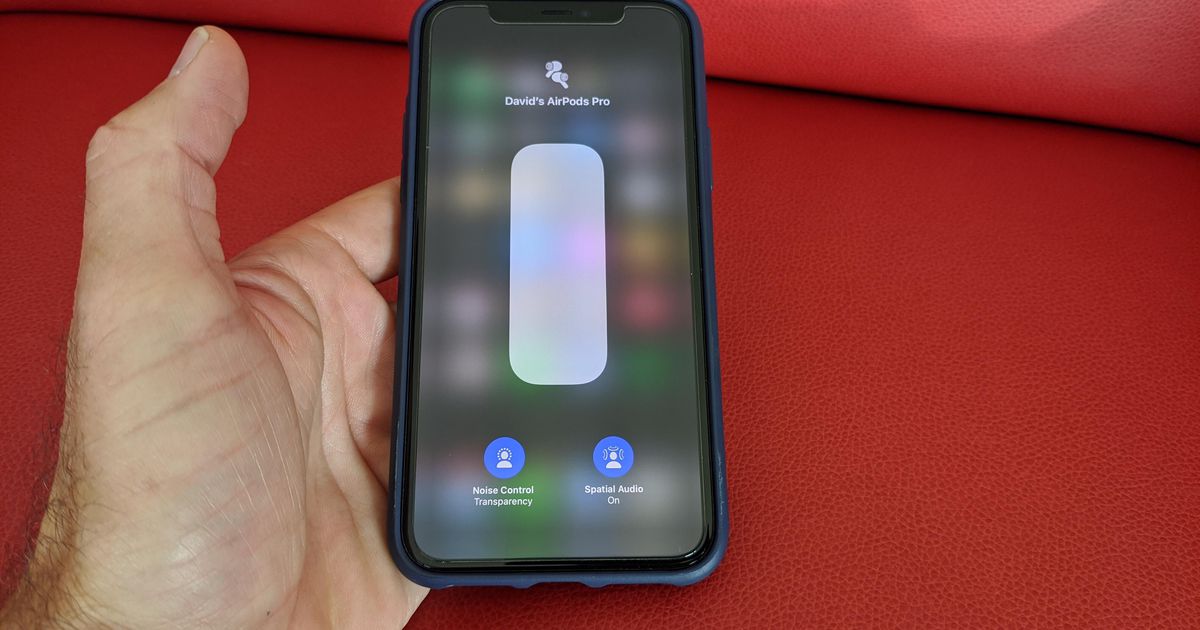 This story is part of Apple Event, our full coverage of the latest news from Apple headquarters.

When I first updated my iPhone 11 Pro to iOS 14 to try out Apple’s new spatial audio feature, I was a bit mystified. “Not sure what’s going on,” I wrote a colleague. “I seem to have the new firmware [3A283] on AirPods Pro. It says I have spatial audio. But what some people are describing I’m not experiencing. Restarting phone and earbuds.”

That made all the difference. After I turned the phone back on and reinserted the buds in my ears (after returning them briefly to their charging case), I launched a movie on Apple TV again and was greeted by a completely different audio experience. It’s hard to describe the sensation but my immediate reaction was to check whether the earbuds were actually on because the audio sounded like it was coming from the phone (not the buds), which was sitting on the table about two feet away from me. It was an out-of-bud experience. (For instructions on how to enable spatial audio, go here.)

Back in July, after Apple first announced the feature, I wrote about how spatial audio had a chance to be a game-changing headphone feature and how Bose and Sony should be worried, especially if Apple brings it to the AirPods Studio, its rumored full-size headphones that may get announced next month along with the new iPhone 12.

At that point, I hadn’t heard spacial audio in action, so I wasn’t ready to go out on a limb and declare it revolutionary. Now that it’s out, however, I can say that it lives up to the hype. It changes the small-screen watching experience, adding a bona fide surround-sound experience, albeit one that’s limited by the AirPods Pro’s sound quality.

The AirPods Pro will convert 5.1-channel, 7.1-channel or Dolby Atmos digital audio signals into virtual surround — and it will eventually work with any video streaming app that supports multichannel audio, including Vudu, Netflix, Hulu, Disney Plus, HBO Go and Max, Amazon Video and the Apple TV Plus app, of course. (The feature is currently not working yet for Netflix or Amazon Video.)

I watched about 15 minutes of the movie 1917 from my library on Apple TV Plus, along with an episode of Ted Lasso — a surprise hit for Apple — then shifted over to HBO Max on an iPad (6th-gen) to watch Midway, which seemed ideal for testing surround-sound effects, with all its WWII dogfight scenes and aircraft-carrier bombing runs through enemy fire.

It was an out-of-bud experience

No, spatial audio isn’t going to deliver the same kind of surround sound experience that my 7.1 home theater does with seven speakers and a sub placed appropriately around a room (I don’t have an Atmos set up). But it is a decent facsimile made more remarkable because it’s coming from such a tiny set of earbuds. You do get the sensation that bullets are flying around you in those dive-bomb scenes in Midway and the audio, in general, feels more spacious and directional.

As I’ve said before, simulated surround sound isn’t a new feature. It’s been available on headphones for many years, most recently with Dolby Atmos. But Apple’s new spatial audio feature uses the AirPods Pro’s built-in accelerometers and gyroscopes to track the motion of your head while simultaneously tracking the position of your iPhone or iPad with their accelerometers and gyroscopes.

Sound is placed virtually in a 3D space relative to the location of your screen. If you turn your head or move your device, the dialogue track — actors’ voices — remains fixed to the screen, with sounds appearing to be coming from behind you, above you and to the left and right. If you turn around and face the opposite direction from your screen, dialogue, in fact, will appear to be coming from behind you. Typically, when you move your head, the surround effects disappear.

The feature is only designed to work with the iPhone 7 or better (it works with the new iPhone SE but not the old SE, iPhone 6S or any iPod Touch) and more recent iPads (the third-gen or later 12.9‑inch iPad, the 11‑inch iPad Pro, the third-gen iPad Air, sixth-gen or better iPad and fifth-gen iPad Mini). Stereo tracks can also get the spatial-audio treatment if the app developer adds an Apple plug-in. Starting with a stereo signal probably won’t yield the best virtual surround experience, however.

Most people should be impressed with what they hear. But, as I said, the AirPods Pro have their sonic limitations in terms of overall sound quality — clarity and definition is a little lacking by audiophile standards. I couldn’t help but wonder how much better the spatial-audio experience would be with a set of full-size headphones that presumably could deliver higher-quality audio and have batteries with longer lifespans than the AirPods Pro, which tend to have to be replaced after a couple of years of heavy use.

As we wait for the AirPods Studio to arrive, we’re seeing the AirPods Pro selling for $199, or $50 less than their list price, in flash sales. With a plethora of competing models available and more coming soon, like Bose’s QuietComfort Earbuds, the AirPods Pro are far from the only noise-canceling true wireless earbuds around.

iOS 14 also brought a new Quick Switching feature to the AirPods Pro and second-gen AirPods that allows Apple users to automatically switch between their Apple devices that are logged into their iCloud accounts. For example, I was watching Apple TV Plus on my iPhone and then switched over to HBO Max on my iPad. As soon as the audio started on the iPad, I heard it in my AirPods Pro. I then switched over to a 12-inch MacBook to do a Zoom call. If a call comes in on your iPhone, you can answer it and the audio automatically shifts.

At a time when the AirPods Pro no longer stand out like they did when they first launched, spatial audio in particular and Quick Switching to a lesser degree give them some unique features, for iOS users anyway. It helps them once again appear more cutting-edge. That’s a pleasant surprise, particularly for those who’ve already paid fairly big bucks for a pair of AirPods Pro and now get an upgrade for free.

Stay up-to-date on the latest news, reviews and advice on iPhones, iPads, Macs, services and software.