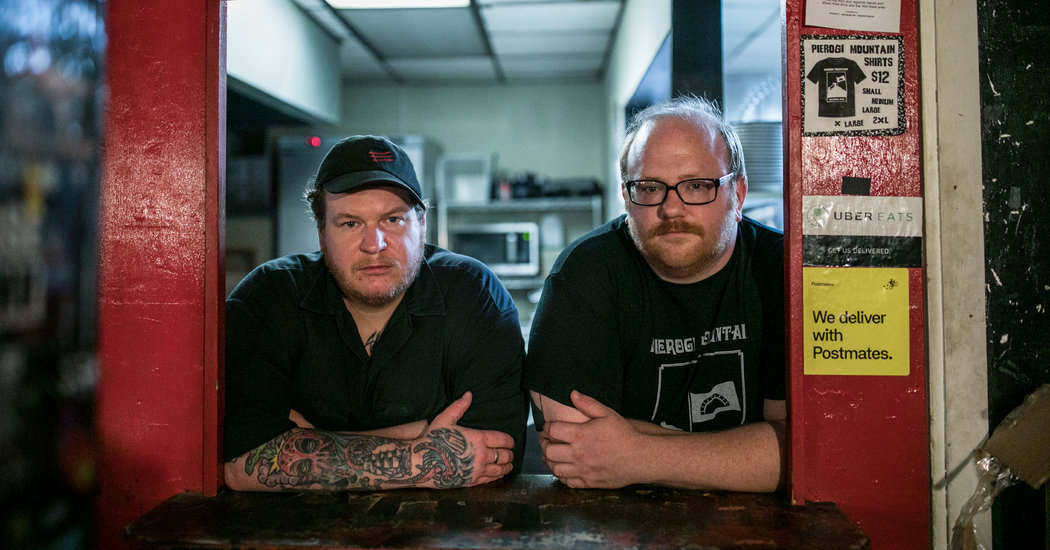 As Diners Flock to Delivery Apps, Restaurants Fear for Their Future

Before the coronavirus lockdowns, Matt Majesky didn’t take much notice of the fees that Grubhub and Uber Eats charged him every time they processed an order for his restaurant, Pierogi Mountain.

But once the lockdowns began, the apps became essentially the only source of business for the barroom restaurant he ran with a partner, Charlie Greene, in Columbus, Ohio. That was when the fees to the delivery companies turned into the restaurant’s single largest cost — more than what it paid for food or labor.

Pierogi Mountain’s primary delivery company, Grubhub, took more than 40 percent from the average order, Mr. Majesky’s Grubhub statements show. That flipped his restaurant from almost breaking even to plunging deeply into the red. In late April, Pierogi Mountain shut down.

“You have no choice but to sign up, but there is no negotiating,” Mr. Majesky, who has applied for unemployment, said of the delivery apps. “It almost turns into a hostage situation.”

Even as apps like Grubhub have cast themselves as economic saviors for restaurants in the pandemic, their fees have become an increasing source of difficulty for the establishments. From Chicago, Pittsburgh and Tampa, Fla., to Boise, Albuquerque and Richardson, Texas, restaurant owners have taken to social media to express their unhappiness. Some restaurants have shut down, while others have cut off the apps and are looking for other ways to take orders.

Complaints about the fees that the apps charge to both restaurants and consumers are longstanding, but the issue has become heightened as many restaurants have shut down in-room dining. Even as they begin reopening, delivery is likely to remain a bigger part of their business than before the pandemic.

Several restaurants have also publicly worried that if Uber’s talks to acquire Grubhub succeed, small restaurant owners will have even less power in pushing back against the fees.

Peter Land, a spokesman for Grubhub, said Mr. Majesky paid higher fees than normal because he had chosen to take part in marketing programs that increased his restaurant’s visibility.

“We recognize this is a difficult time for independent restaurants,” Mr. Land said. “We have redoubled our efforts to support them.”

Mr. Majesky said that Grubhub had led him to believe the marketing program was one of the things it was paying for to help local restaurants, and that he had not realized he would have to foot the bill. Other restaurants have voiced similar complaints.

Mr. Land and Uber declined to comment on their deal talks.

Restaurant owners are concerned about more than the apps’ fees. In 18 interviews with restaurant owners and industry consultants, plus in lawsuits and social media posts, many said Grubhub, DoorDash and Uber Eats also engaged in deceptive practices like setting up websites with inaccurate information for the restaurants, all without asking permission.

“The fact that they misrepresented my brand in these times, and pushed Grubhub clients toward other restaurants — it’s deplorable,” said Erik Riggs, who owns Freshcraft. He is seeking class-action status for the lawsuit.

After The New York Times contacted Grubhub about the same issue at restaurants in Pittsburgh and Chicago, it took down the incorrect language. The company declined to comment on the lawsuit or the language on the sites.

The gap between the success of the apps and the pain of the restaurants is striking. Spending at restaurants in recent weeks dropped about 35 percent from a year earlier, while revenue for the delivery services rose about 140 percent, according to data from M Science, a firm that analyzes transaction data.

At the heart of the issues is some basic math. For the typical restaurant, fixed costs such as labor, food and rent eat up around 90 percent of the money coming in. That leaves little room for the base fees that the large delivery services charge small restaurants, which generally are 20 percent to 30 percent of what customers pay for each order.

Chicago, Los Angeles, New York, Seattle and San Francisco have recently put into effect legislation or emergency rules to cap the apps’ fees until the lockdowns are over. But even with the caps, 62 percent of local restaurants in San Francisco said in a survey last month that they were losing money on delivery and takeout.

The fees have taken on a particularly bitter taste as delivery apps have begun campaigns proclaiming they will help save local restaurants. One ad proclaimed: “Grubhub believes that together, we can help save the restaurants we love.”

George Constantinou, who owns four restaurants in the New York area and uses DoorDash, Uber Eats and Grubhub, said: “Everyone is trying to help us — our landlord, New York City, our customers. But these companies who are supposed to be our partners take more money than anyone else and try to get us on every charge they can.”

He said a Grubhub employee had recently called one of his restaurants, Bogota Latin Bistro, to check an order. When no one answered the phone, Grubhub canceled all 10 outstanding orders, charged Mr. Constantinou for the meals and their associated fees — and declined to give the restaurant a refund even though some of the orders were already being delivered, according to records and an email exchange with Grubhub shared by Mr. Constantinou.

After being contacted by The Times, Grubhub paid back Mr. Constantinou for the charges from that night and more recent instances when the same thing happened. The company did not have a comment beyond saying it had fixed the issues.

One local delivery company in Texas, Favor, eliminated all commissions for independent restaurants at the beginning of the lockdowns. In contrast, the big delivery start-ups have advertised more limited steps they have taken to help smaller restaurants during the crisis.

Matt Maloney, Grubhub’s chief executive, promised at a news conference in March with the mayor of Chicago, Lori Lightfoot, to contribute $100 million to reducing fees for local restaurants. But the fees were just deferred for a few months, after which the restaurants will have a few weeks to pay them back.

In early April, Uber Eats cut the fees that restaurants pay if they don’t use its drivers. It also set up a program to allow diners to contribute to restaurants. In the program’s first two months, it generated an average of $37 for each restaurant, according to Uber’s figures.

DoorDash, which does most of its delivery business with big restaurant chains, said in April that it would cut its primary fees in half for all independent restaurants until the crisis passed.

“They take care of their corporate partners first and then use us for advertising to try to create good will,” said Scott Weiner, the head of the Fifty/50 Restaurant Group, which owns 20 restaurants in Chicago.

Beverly Kim, the chef at the Michelin-starred Parachute in Chicago, signed up to offer delivery through the Caviar app in March after the lockdowns began. Caviar offered her a month of service without taking any commissions.

But after a few days, Ms. Kim noticed that Caviar was charging the full fees of about 25 percent of an order. It took her staff days to get a response and eventually a refund from Caviar, she said.

More recently, she noticed that on the website the service had created for her restaurant was a prominent orange label that said, “Only on Caviar.” That was wrong, Ms. Kim said, because she was also taking delivery orders through her own website, with few fees. Caviar, which is owned by DoorDash, took down the sticker after she complained at a Chicago City Council meeting last month.

Once Caviar begins charging the full fees, Parachute will lose money on orders taken through the app, Ms. Kim said. She said she had recently told Caviar that she was canceling the service.