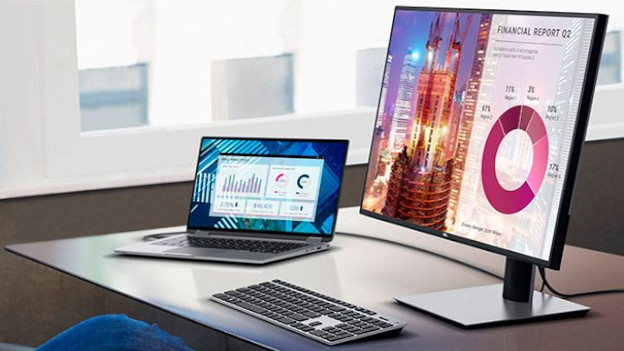 If you’re looking for a feature-rich display for your office, Dell’s UltraSharp U2720Q may be your perfect option. This monitor has a 4K resolution and excellent color accuracy that makes it well-suited for professional work projects. Best of all, it’s available now with hundreds knocked off the retail price.

Working on a 4K monitor has some major advantages, including fitting more on-screen at any given time. This display from Dell utilizes a 27-inch 4K panel that also supports 1.07 billion colors, making it well-suited for image editing. Right now you can get one from Dell marked down from $719.99 to $485.99 with promo code STAND4SMALL.

The Core i9-9900K is one of Intel’s most powerful processors with eight CPU cores that can hit speeds as high as 5GHz. The processor is also unlocked, giving you the ability to overclock it in an attempt to extract extra performance from the chip. Currently, you can get it from Newegg along with a free game marked down from $449.99 to just $369.99 with promo code GAMERDAYS49. Amazon built the Echo Studio to be an exceedingly high-end smart speaker. It has a total of five speakers built-in to provide clear high notes as well as powerful bass. It also comes bundled with a Philips Hue bulb, which can be controlled with Alexa. Right now, this bundle is on sale from Amazon marked down from $229.98 to just $169.99, which makes it the same price as the Echo Studio by itself. Dell upgraded this laptop with Intel’s new 10th generation Core i7-10510U processor that has four CPU cores clocked at 1.6GHz. The system also comes with a fast NVMe SSD storage device, a 1080p display, and an AMD Radeon 610 graphics processor for running low-end games. You can get it now from Dell marked down from $1,212.86 to just $659.00. Samsung designed its Galaxy Tab S6 Lite tablets with an octa-core ARM processor and a high quality 2,000×1,200 resolution display. This model also ships with 64GB of storage and a Samsung S-Pen for hand taking notes on screen. Right now you can get it from Amazon marked down from $349.99 to $279.99.

As its name suggests, Amazon’s Fire TV Stick 4K is capable of streaming 4K content to your smart TV from a wide range of sources. It also comes with a remote that features Alexa, which is able to hear and obey voice commands. Right now select customers can get it marked down from $49.99 to $24.99 with promo code 4KFIRETV.