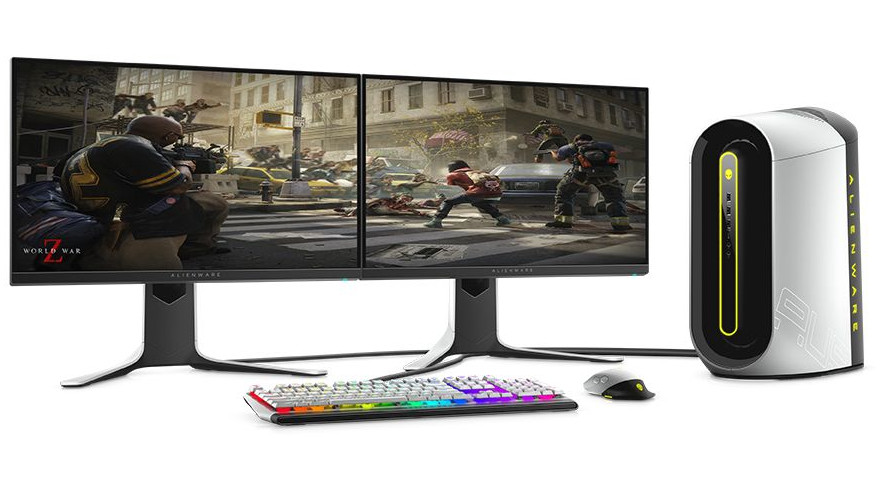 Step up your game with a high-end Dell Alienware desktop. Today you can save $200 on one of these edgy-looking systems; it comes equipped with a top-tier Ryzen 7 3700X processor and an Nvidia RTX 2060 Super graphics card.

This Alienware desktop features an edgy, rounded design and powerful gaming hardware capable of running most current AAA titles with high graphics settings. In addition to looking cool, this system was also designed to provide improved airflow over the older Aurora desktops, which means the hardware inside will also run cooler as well. For a limited time with promo code 50OFF699, you can get this system from Dell marked down from $1,379.99 to $1,179.99.

External HDDs like this one are excellent for backing up your files to help avoid their loss in the event of a hard drive failure. This drive can also hold an enormous amount of data with a total capacity of 16TB. Today, Amazon is offering this drive marked down from $389.99 to just $308.99. Dell’s newly redesigned G5 15 gaming laptop comes equipped to run games with high graphics settings. The system’s Intel Core i7 processor has six cores that can hit speeds as high as 5GHz, and the Nvidia GeForce RTX 2060 graphics chip can handle advanced graphics techniques including ray-tracing. Add to that a 144Hz 1080p display and it becomes clear that this system is well equipped for gaming. Right now, you can get this system with a steep $230 discount from Dell that drops its price from $1,379.99 to $1,179.99. Sega’s miniature Genesis console comes loaded with 42 classic Sega Genesis games, including hits like Sonic The Hedgehog, Castlevania, and Altered Beast. The system also comes with two controls for playing games with a friend, and right now you can get it with a 50 percent discount that drops the price from $79.99 to just $39.99. At a time when mainstream game consoles like the Xbox, PlayStation, and Nintendo Switch are selling out everywhere, this is an exceptional deal.

This high-powered robot vacuum has 2,000Pa of suction power and a large 5,200mAh battery that enables it to run for up to 150 minutes on a single charge. The Roborock S5 also supports Wi-Fi and can be controlled using a smartphone app and Alexa voice commands. Right now you can get it from Amazon marked down from $599.99 to $359.99 with promo code ROBOROCKS5.

Ring’s Peephole device features a 1080p HD video camera and it has built-in speakers and a microphone. This allows you to safely check who is knocking at your door and talk to them from anywhere. It even works when you’re not home, and comes with a 3rd gen Echo Dot. You can get it now from Amazon marked down from $179.98 to $79.99.