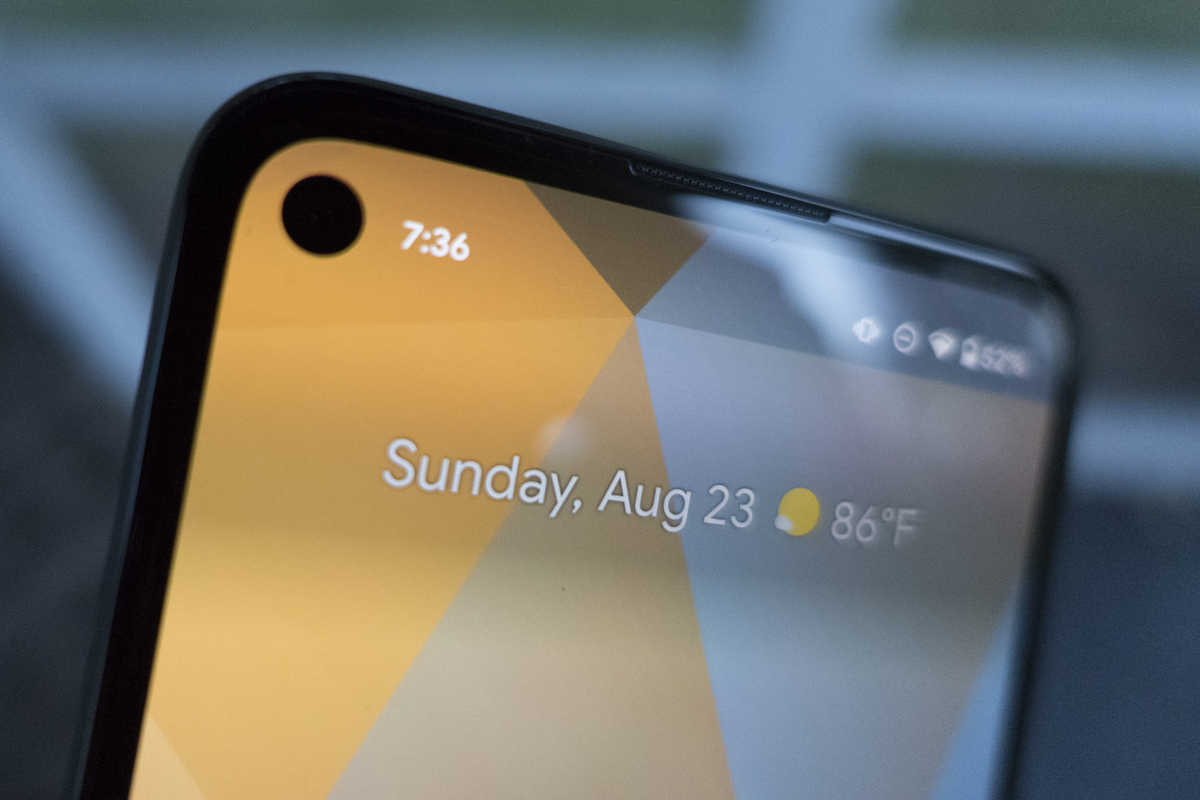 Like Apple’s $400 iPhone SE, the $349 Google Pixel 4a isn’t a want phone, it’s a need phone. Apple made certain sacrifices with its budget iPhone to keep the price low, and Google has done the same with its own cut-rate Pixel, dropping features like wireless charging, 90Hz Smooth Display, Face Unlock, and a dual camera that pushed the Pixel 4 XL to $900.

You might think you need those features, but you probably don’t. You only want them. With just 6GB of RAM and a 60Hz display, the Pixel 4a still delivers an Android experience that’s as smooth and speedy as any premium phone. Night Sight and Live HDR+ bring a high-end feel to photo-taking that rivals anything Apple brings with the iPhone 11 Pro. And while I’ll admit that I miss wireless charging, wired charging is plenty fast out of the box.

For a third of what Samsung charges for its new Galaxy Note 20 Ultra, the Pixel 4a nails the bare necessities: a lightweight phone with a nice design that’ll take great pictures and last all day. Put it all together, and you’re getting the most practical Android phone ever made and the easiest buying decision you’ll ever make. You don’t even need to pick a color—it only comes in black.

I’ve never been a fan of Google’s overly utilitarian design language, but it’s done an admirable job with the Pixel 4a. The giant bezels around that have been present on nearly every other Pixel have been dramatically thinned around its screen to give the phone a high screen-to-body ratio (83 percent). The Pixel 4a’s small size means it has a relatively small display as well—5.8-inches, which is smack dab in the middle of the 5.6-inch Pixel 3a and 6-inch Pixel 3a XL.

The 2340×1080 display is essentially the same one you get in the Pixel 4, so the same frustrations are present. Colors will be muted even in Boosted mode and system text has an ever-so-slight glow around it. Still, it’s a good size for a phone in this price range that’s basically in the sweet spot for whatever you want to do. Videos and games look good, text is plenty big, and apps have plenty of room to operate. And since it’s basically all screen on the front with nicely rounded corners that match the contours of the body, the screen feels even bigger than it is.

Part of that optical illusion is due to Google’s use of a hole-punch camera on the 4a, a first for a Pixel phone. It’s left-aligned rather than centered, so the status bar will be pushed out of place, but it’s a giant step forward for Google’s phone design and blows away Apple’s four-year-old iPhone SE.

However, there’s no mistaking the Pixel 4a for a premium Android phone. It’s made of plastic and only comes in black, so there’s no must-have color or shimmery effects to catch your eye. In the top left corner, you’ll find a replica of the square camera array on the Pixel 4, but the smaller size and black color set against the matte black body of the phone helps it blend in. Compared to the iPhone SE’s glass back, the Pixel 4a feels a little cheap, even if it is incredibly light at 143 grams (versus the SE’s 148-gram body).

That plasticky feel extends to the buttons, which have a stickiness like a case that hasn’t been broken in. But the mint green-colored power button looks great, especially against the all-black enclosure, and the trademark curved sides fit perfectly in your hand. It’s the first Android phone I’ve used in a long while that’s truly comfortable using with one hand, and anyone who’s looked longingly at the iPhone SE’s stature will be very pleased with the Pixel 4a.

The Pixel 4a joins the iPhone SE as one of the few remaining phones that have a circular fingerprint sensor, and also like Apple’s Touch ID, it’s surprisingly great. Unlocking is quicker than any phone I’ve used with an in-display sensor, and it makes me wonder why phone makers moved away from them in the first place. If Google can fit one on a phone this size, then Samsung and OnePlus can certainly fit one on their larger phones, not to mention a headphone jack, which the Pixel 4a also has.

It’s not fast but it’ll last

With a Snapdragon 730G and 6GB of RAM, the Pixel 4a isn’t going to win any speed or performance awards. But Google makes the best of a slower chip with a finely tuned Android 10 that feels more capable than it should.

But for a processor that produced some of the lowest benchmarks scores I’ve seen in years, the Pixel 4a really isn’t bad. It can’t hold a candle to the A13 chip in the iPhone SE, but it’s also not nearly as slow as its benchmarks indicate:

Those numbers are somewhat comparable to the Snapdragon 845 in the Pixel 3, and the performance is roughly in line with a two-year-old flagship phone. That is to say, it’s not terrible, but you can feel it struggle when running games and intensive apps, and animations and transitions were visibly laggy at times.

But thanks to Google’s Android optimizations, the Pixel 4a belies its processor’s capabilities. It’s still nowhere near as fast as the iPhone SE’s top-of-the-line A13 processor, but the Pixel 4a occasionally felt as fast as my Pixel 4 XL. Even without a high refresh rate, scrolling is very smooth, and the Snapdragon 730G rarely feels frustratingly slow, even as someone who regularly uses the top-of-the-line processors.

You’re getting a robust 128GB of storage with the Pixel 4a, more than the 64GB you get with the base iPhone SE and the Pixel 4. The Pixel 4a’s battery is also bigger—3,140mAh versus 1,821mAh (iPhone SE) and 2,800mAh (Pixel 4)—and Google squeezes every bit of juice from it. Benchmarks topped 11 hours and I comfortably made it through a full day, with sometimes more than 50 percent of my battery remaining. Both phones are doing a lot with a little, but I’ve never made it through a full day with my iPhone SE without at least a quick charge.

One camera with a toolbox of tricks

The Pixel line has always preached camera processing over camera hardware, so as expected the 4a doesn’t wow you with lenses, It has a single rear 12.2MP dual-pixel camera with an f/1.7 aperture and 77-degree feel of view. That’s very similar to the 12MP, f/1.8 camera you get with the iPhone SE and functionally identical to the main lens on the Pixel 4 XL, which costs more than twice as much, so Google isn’t cutting corners here.

You don’t get the secondary telephoto lens that comes with the Pixel 4, but you do get nearly all of the fringe benefits: Night Sight with astrophotography, Top Shot, Portrait Mode, HDR+, Dual exposure controls, Motion Auto Focus, even Super Res Zoom, some of which aren’t available on the Pixel 3. That’s an impressive set of camera features for a $349 phone, but even more impressive is how well they work on a $349 phone.

Even without the Pixel Visual Core ISP, the Pixel 4a takes incredible low-light photos. Photos that are otherwise unusable are nicely brightened without being blown out, and the results consistently challenged what I got from the iPhone 11 and Pixel 4—and it completely blew away the iPhone SE. For example, while you can see some color and detail in the low-light photo above snapped by the iPhone SE, the Pixel 4a version looks like it was taken in completely different lighting.

In bright light, the Pixel 4a performs extremely well, with robust colors, excellent clarity, precision focus, and incredible shutter speed. The 4a always handled movement well, but the new Motion Auto Focus feature shows no signs of blurring. Portraits are also as good as they’ve ever been on a Pixel, and the Pixel 4a is also quite good at zooming, with full 7x shots producing clear images with surprisingly good white balance. It even has a handle digital level that helps keep your shot straight.

And the iPhone SE simply can’t compete. While it certainly takes good pictures, basically none of the Pixel 4a’s features are available on the iPhone SE, most notably night mode and zooming. While you can download third-party apps that replicate the functionality somewhat, the results from the stock camera aren’t anywhere near as good as they are on the Pixel 4a, and there’s a lot to be said for getting a ready-made, out-of-the-box experience.

Should you buy a Google Pixel 4a?

Whether you’re budget-conscious, feature-conscious, or are just tired of paying too much for phones that barely fit in your pocket, the Pixel 4a is a fantastic option that won’t make you feel like you cheaped out.

And quite frankly, even if you do think you need premium features like gobs of RAM or 100X zoom, the Pixel 4a might just convince you otherwise. Its performance is the only sticking point, but for a $349 phone, it definitely exceeds expectations even if it’s a far cry from the A13 chip in the iPhone SE. In every other area, the Pixel 4a excels, so much so that you won’t even miss a glass back or wireless charging.

So if you want a phone that looks great, lasts all day and then some, and takes incredible pictures, get the Pixel 4a over the iPhone SE or Galaxy A71 or any other phone in its price range—and maybe even a few that aren’t.