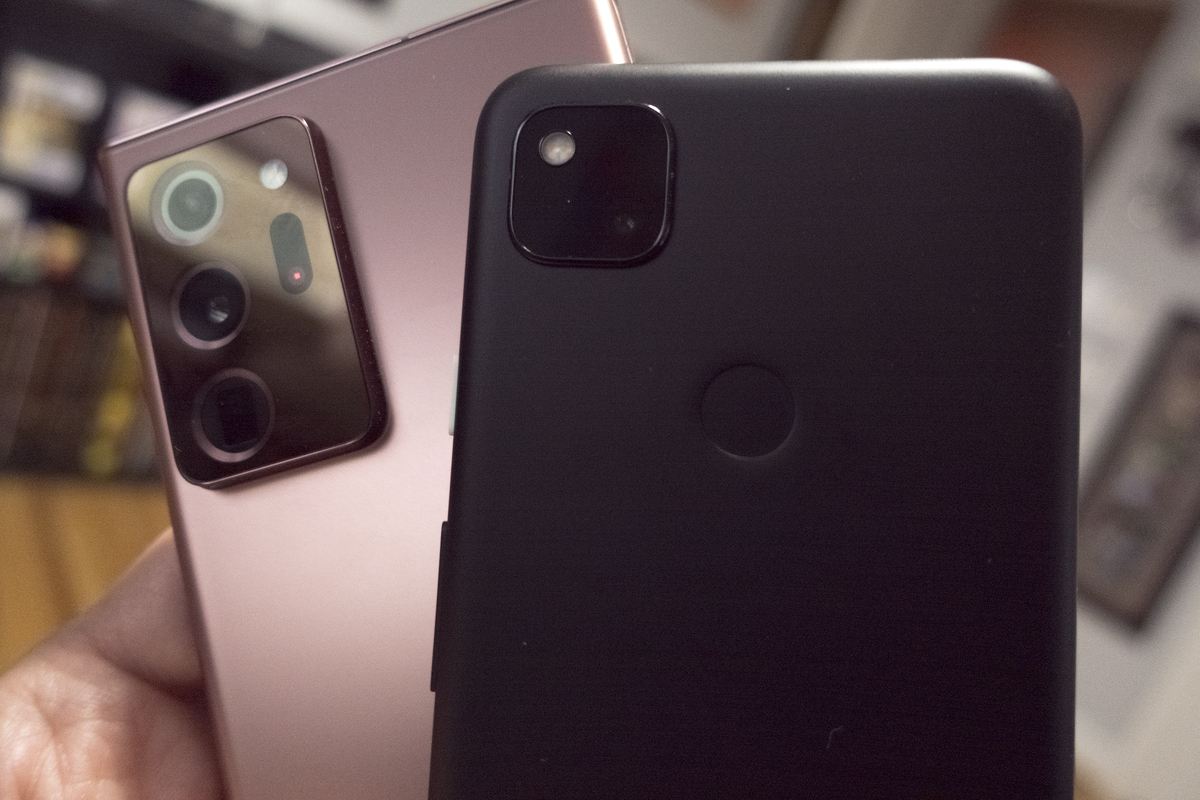 Google Pixel 4a vs Samsung Galaxy Note 20 Ultra camera shootout: Are these pictures worth $1,000?

The two biggest Android phones of the moment couldn’t be more different. They’re so different, in fact, that there’s nearly $1,000 between them: The Google Pixel 4a costs just $349, and the Samsung Galaxy Note 20 Ultra will set you back a whopping $1,300. But while it’s crazy to compare things like performance, design, or battery life between phones so different in price, the camera is another story.

The Pixel 4a’s photography chops are more high-end than its price tag would suggest. It has the same main camera as the $899 Pixel 4 XL, as well as the same camera app features, including Night Sight and Live HDR+. And because it’s a Google phone, we know the processing is off-the-charts awesome. But can it stand up to a phone that costs nearly four times as much? Let’s find out.

In good lighting, both of these phones perform incredibly well. As you can see in the photos below, both cameras were able to capture impressive detail and color, with the Note 20 Ultra amping up the saturation just a bit more than the 4a. The Pixel 4a captures a bit more leaf detail even in places where the background is blurred, or the lighting is a touch on the dark side.

The clarity and detail on the stigma are very impressive in the Note 20’s shots. That’s aided in part by the Note 20 Ultra’s new laser autofocus, which locks in on its subject very quickly and isn’t fooled by subtle movements caused by the wind.

However, I found that it tends to focus so well, the surrounding scene was in a constant state of blur even when I wasn’t using Live Focus. It’s easiest to see in the pictures of the thorns above. Where the Pixel 4 zeroed in on the thorns and kept some of the detail on the surrounding leaves, the Note 20 Ultra had a tougher time distinguishing among all the green.

Google kicked off the race to take the best low-light shots with Night Sight on the Pixel 3. Even without the dedicated Pixel Visual Core processor, you’re getting excellent low-light photos on the 4a.

Samsung has made great strides with its own low-light mode on the Note 20 Ultra as well. With a decent amount of ambient light, otherwise dark photos were nicely brightened on Note while still preserving shadows, with even greater detail than the Pixel 4a as seen in the photos above.

When the light is nearly all gone, however, the Pixel 4a performs a little better thanks to Google’s AI wizardry. The photos above were taken in near-total darkness. While neither camera took a flawless shot, the Pixel 4a grabbed more of the color and detail of the original, while the Note 20 merely brightened things.

The Note 20 Ultra has a second zoom lens to work with, so it should be the better portrait taker. For the most part, it is. However, the Pixel 4a more than holds its own against Samsung’s superior hardware. As you can see below, both portrait modes do a fantastic job of pulling out the subject from a busy background and generating nice background blur with little effort. However, the Note 20’s extra lenses make edges just a little bit sharper.

With a single 12MP lens, you’d expect the Pixel 4a action shots to be extremely blurry. Once again, Google’s tremendous processing picks up the slack. From near and far, both phones snapped motion shots as if the subject were standing still, as you can see in the photos of splashing water below.

Even though Samsung has dialed it back to 50X from the S20 Ultra’s insane 100X, the Note 20’s premier feature remains its Space Zoom. Samsung claims you’re getting “super resolution” at 50X, way further than the Pixel 4a’s 7X. f you want the most zoom, there’s no contest between the two phones.

But even if you’re sticking to less than 10X zoom, the Note 20 is the superior telephoto phone. At max zoom, the Pixel 4a is noticeable noisier than the Note 20 Ultra, and less accurate all around. From the blurry words to the blown-out colors, the Piel 4a struggles mightily without a dedicated telephoto lens, giving the Note 20 Ultra a big advantage.