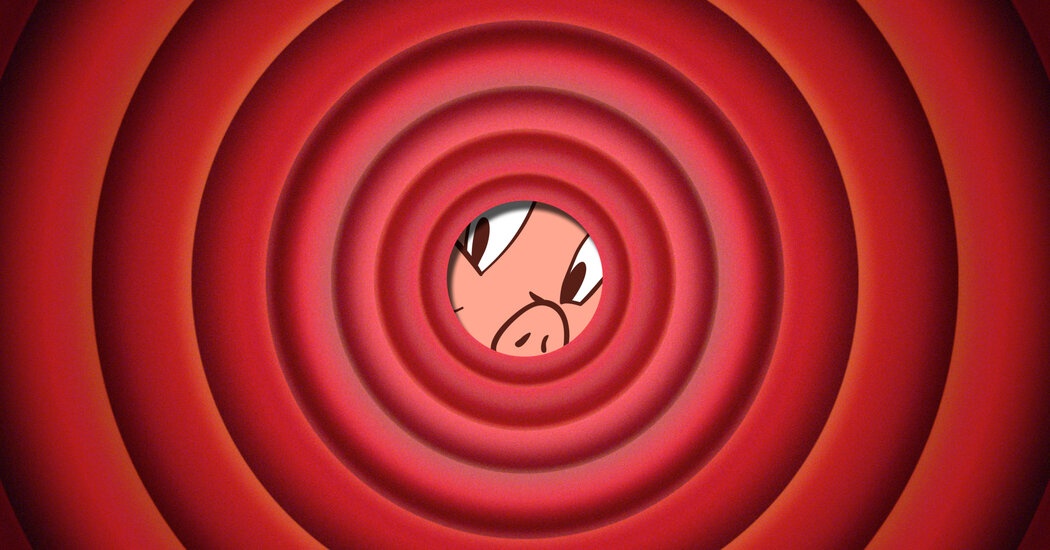 How Porky Pig Works From Home

In the debate about whether the pandemic will permanently end office jobs, Bob Bergen has a compelling message about the enduring power of personal collaboration.

Bergen is the voice behind Porky Pig and a zillion other animated movies, television shows and TV commercials. For voice actors like him, the pandemic shifted work that had already been mostly done at home into an entirely remote profession.

Bergen told me he is grateful to have a job suited to our upended lives, but he can’t wait to work with people again.

“I don’t have to get on the freeway and drive from job to job so I can do more work. I don’t have to wear pants if I don’t want to. There are lots of pros to doing this,” he said. “But I do miss human interaction.”

In a way, Bergen’s job is ideally suited to these weird times. Gradually over the last decade or so, most of the voices we hear in commercials, movie trailers and audiobooks have been recorded from in-home sound booths or closets.

But Bergen said that animation was one of the last corners of voice acting where people were recorded at movie studio lots or other out-of-home spots, in part given the complications of mixing multiple cartoon voices.

Then the pandemic hit. “Literally, within 10 days, I along with most of the cartoon actors I know upgraded our home studios” to be able to do any job from home, Bergen said.

A technical expert coached Bergen over Skype to download extra software, and he upgraded some audio equipment for his home recording booth. Bergen estimates it cost him about $2,000.

Bergen showed me his updated workplace over Zoom. (And, yes, he did slip seamlessly into the voice of Porky Pig when we talked.)

His workplace is not much bigger than a closet, with soundproof walls and one window that lets in outside light. From a wall-mounted iPad, Bergen connects over online video with a voice director, writer and other collaborators during recording sessions. It’s a cozy, possibly claustrophobic office that he called his “money box.”

Bergen’s work life hasn’t dramatically changed. Now instead of having nightmares about forgetting his lines, he worries about forgetting to press the record button. He’s debating whether to shift the voice acting classes he’s taught for decades into virtual coaching.

Given how much hasn’t changed for Bergen, I was surprised that he stressed the deficits of working alone at home. How is it different, I asked, than recording by himself in an animation studio?

He said that he now appreciates how much human interaction there is when you have to physically go somewhere for work. You can hug the director instead of waving hello over an iPad, and spontaneously see people as you walk around a movie studio.

I think many of us now working from home can relate to missing those unplanned interactions for which Zoom meetings are a poor substitute.

“It’s the stuff outside of recording that I absolutely miss,” Bergen said. “I think when this is all over, we’ll absolutely be going back into the studio.”

Tip of the Week

Getting to know your old pal, Gmail

It often surprises me how many people are unaware of some of Gmail’s special features, like scheduling emails to send later and blocking senders.

I suspect it’s because so many of us have used Gmail for so long — with a design that has barely changed in over a decade — that we don’t expect it to add features.

It’s better late than never, especially while many of us are working from home.

Here’s how to schedule an email to send later:

Here’s how to block someone from sending you emails, using an email from Target as an example:

I find scheduling emails especially useful for important work memos that I want to land in someone’s inbox first thing in the morning.

And blocking emails from a sender is a great option when you don’t want to go through the hassle of clicking on the “unsubscribe” option at the bottom of a marketing email.

Did you know that cattle love eating bananas — peel and all? (You should definitely follow everything from this unfailingly cheerful Twitter account of an English farm.)