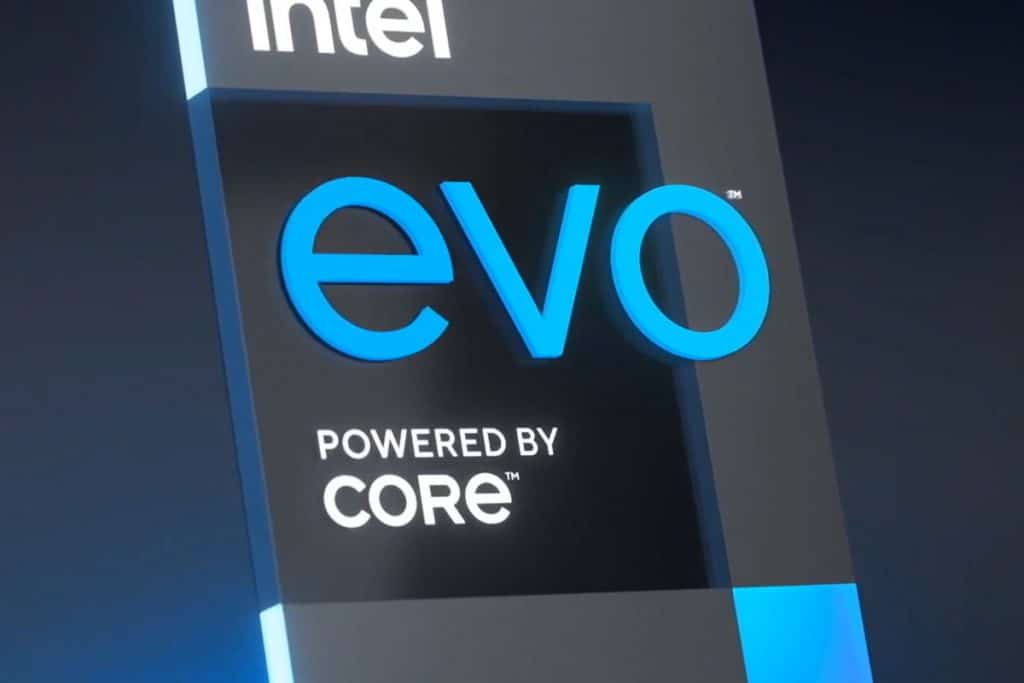 The new Intel Evo sticker you’ll see on laptops this fall is Intel’s answer to the question, “So what this makes this laptop PC so special, anyway?”

Ever since Intel launched its Project Athena premium thin-and-light PC program eighteen months ago, Intel and its partners have struggled to communicate what makes their collaboratively designed notebooks better than the rest. Evo is its new signal. In what Intel is informally calling the “Project Athena Second Edition,” Intel told PCWorld how it is prioritizing its new Intel Evo brand as a badge to identify these premium ultrabooks, while redefining what they stand for: cloud- and browser-based work.

Intel is launching the new Evo brand Wednesday alongside the formal, final unveiling of its 11th-gen Tiger Lake processors. The second edition of the Project Athena platform calls for a minimum specification of either an 11th-gen Intel Core i5/i7 with Iris Xe graphics, alongside a 12- to 15-inch Full HD (or better) display, a chassis 15mm or thinner, and Intel’s Dynamic Tuning technology.

Intel Evo badges will accompany four new thin-and-light laptops at launch, with more to come: the just-announced Lenovo Yoga 9i, the Asus Zenbook Flip S, the Samsung Galaxy Book Flex 5G, and the latest version of the Acer Swift 5. (Will there be an actual sticker? We don’t know for certain, but the Engineered for Mobile Performance “visual identifier” used for Athena notebooks was just for in-store displays.)

In all, twenty Evo designs are expected by the end of the year, Intel executives said. Intel Evo stickers will appear on laptops from Acer, Asus, Dell, HP, Lenovo, and Samsung, as before. But as Intel promised, there will be new additions for 2020: Dynabook, LG, and MSI. Does the latter signify that we’ll see an Intel Evo gaming PC? Intel isn’t saying.

What’s inside an Evo PC?

The fundamental premise of what Intel is trying to accomplish with Project Athena, or Evo, hasn’t changed: work with PC makers to co-design laptops that are quick to respond, always connected, and can last all day on a single charge. Over fifty first-generation “Athena” PCs shipped from Intel’s partners. But the “Athena” designation was never really loudly trumpeted, sometimes appearing on a spec sheet and little more. The new Evo brand may help change that.

Intel has promised significant gains in clock speed for its 11th-gen Tiger Lake chip, including delivering what it calls the “best ultraportable gaming experience,” including a doubling of gaming performance over the 10th-gen Ice Lake processor. But productivity still seems to be the focus for the Athena platform and Evo badge: Intel promises 20 percent more performance in office applications than competing platforms, meaning AMD’s Ryzen.

“Evo will be the key focus for the rest of this year and into next year,” said Josh Newman, vice president and general manager of PC Innovation Segments in Intel’s Client Computing Group, in an interview. “These will be the best laptops for getting things done.”

Intel developed the original Athena program by using its in-house social scientists to determine what people actually did with their notebook PCs. The company then tasked its engineers to work alongside teams at PC makers to co-develop hardware to address users’ needs. In some cases, that also meant working directly with third-party component suppliers: Over 140 components are now Athena-certified, with new additions that include memory and SSDs with customized firmware.

Responsiveness, long battery life (9 or more hours with a 1080p display, 7 hours with 4K), less than 1 second to instantly wake, and fast charging (30 minutes to enable up to 4 hours of use) are the priorities for Evo notebooks, as well as connectivity via Wi-Fi 6 and the new Thunderbolt 4 I/O specification. Evo PCs will have a minimum of 8GB of memory and at least 256GB of NVMe/PCIe SSD storage, too.

The way people work has changed, and not just because of the pandemic, which helped push Zoom and other videoconferencing apps to the forefront. The rise of web-based applications came before, and it’s an even bigger shift. “Younger professionals live in the browser,” Newman explained. “It’s increasingly about cloud services and doing everything in the browser with hundreds of tabs open and tools to actually manage those tabs into projects.”

With programs running in the cloud, rather than from your local storage, your way of working and even your system requirements change. “It helped us understand, what are the real workflows?” Newman continued. “What are the real workloads? What is the performance impact of having 100 browser tabs open? All of these things help us to inform what experiences we need to design for, and ultimately what experiences we need to test and verify for,” he added.

In a presentation Intel made to PCWorld, those experiences included a number of connected apps and websites: the Chrome browser, interacting with rich media sites like ESPN and YouTube; Zoom, of course, plus web-centric apps like LinkedIn, Twitter, and Slack. A laptop’s responsiveness to productivity apps like the Office suite is measured both by its ability to run local apps and its speed while connecting to the actual files stored in the cloud using OneDrive, said Sudha Ganesh, senior director of Intel’s Client Platform and Silicon Architecture, within its Client Computing Group.

In its ongoing battle with AMD, Intel has pushed hard for reviewers to use “real-world” tests and benchmarks, instead of easily repeatable synthetic benchmarks. With its second-edition Athena platform, Intel tweaked how real-world criteria should be used, yet again.

While using a laptop, users perform certain tasks regularly: opening up a laptop to work, checking email, and so on. Intel calls them “key experience indicators,” or KEIs. KEIs aren’t intended to be especially complicated, as they’re as simple as opening Google Sheets or starting a Zoom video conference. Intel expanded from 15 to 25 KEIs with Athena’s second edition.

For each interaction, Ganesh explained, Intel performed extensive testing, asking users to assign a measure of success (MOS) rating to various interactions. Is three seconds to open a PDF from OneDrive “good”? Is two? Intel let users themselves define what was or was not a satisfactory experience, and then used those evaluations to establish the conditions that would determine whether an Evo PC was good enough to ship.

The Evo-badged laptops were originally co-engineered with a PC maker, then separately tuned to optimize for Intel’s targets. In each of these, Intel preserved real-world conditions rather than testing in an optimized, laboratory-like environment. For example, it wasn’t good enough to test a laptop using a video rundown test, Ganesh said. Instead, her team sought to develop Evo notebooks that would be tolerant of what she called “performance-qualified battery life,” where the “chaos” of real-world conditions—updates, network congestion, and so on—would be running as the qualification tests themselves ran. That included setting screen brightness levels at at a realistic 250 nits, like Intel’s first-gen Athena PCs.

To earn Athena qualification and the Evo badge, each test is run several times, Ganesh said, with each laptop required to pass a specific test run 12 out of 15 times. Again, everyday scenarios apply: The tested laptop doesn’t have a dedicated router, and tests against ESPN.com, for example, are run against a live site with ads enabled.

“Our whole goal is not to disable anything that a user wouldn’t, either,” Ganesh said.

Intel’s Evo: Next steps and questions

One area where the Evo/Project Athena 2.0 specification sticks to the status quo is  webcams— calling for just a 720p resolution, while some of the best webcams on Microsoft Surface hardware are 1080p. “We do have encouragement in our scoring systems, to go to 1080p,” Newman said. “But there are some designs that are just so aggressive…where the right component within the right form factor isn’t ready yet. So in the future, we’re going to look at solving all those problems.”

Newman said the webcam could be improved in two ways: first, by increasing the resolution of the sensor past 720p and even 1080p, and second, by improving the image-quality algorithms. Newman said that Tiger Lake has an image-processing unit that could be used to run white-balancing and low-light algorithms to improve the experience.

As Intel reboots Athena as Evo, some questions remain. Evo badging will apply to convertibles, traditional “clamshell” PCs and detachables, but Google isn’t listed in the current list of Evo customers. Newman was circumspect: “In the first edition [of Athena] we launched a few Chromebooks,” he noted. “We are working with Google on the specs as well, but [we have] nothing to announce yet.”

Microsoft and its Surface devices didn’t participate in the first-generation Athena notebook program, and that company, too, isn’t listed in the new Evo roster. “We’re excited about our ongoing close partnership with Microsoft, focused on innovating for the future across the Surface lineup and continuing to develop Windows optimizations for Intel Core processors,” an Intel representative said in a statement. “While there are no Microsoft Surface devices currently on track for verification through the Project Athena innovation program, we continue to see strong adoption from our other PC ecosystem partners for Windows-based designs.”

Some of the capabilities of the new Evo laptops aren’t as readily apparent in a press release or list of specifications. For example, Newman promised that Intel will spend some time on Wednesday demonstrating the AI capabilities of the new Tiger Lake platform (as it did with Ice Lake) and how real-world apps can take advantage of it.

Consumers are familiar with the “good, better, best” hierarchy associated with Intel’s Core i3, i5, i7 (and even i9) processors. With Evo, it looks like Intel wants to extend this same branding strategy to the premium notebook PCs you’ll be reading about (and possibly buying) this fall.