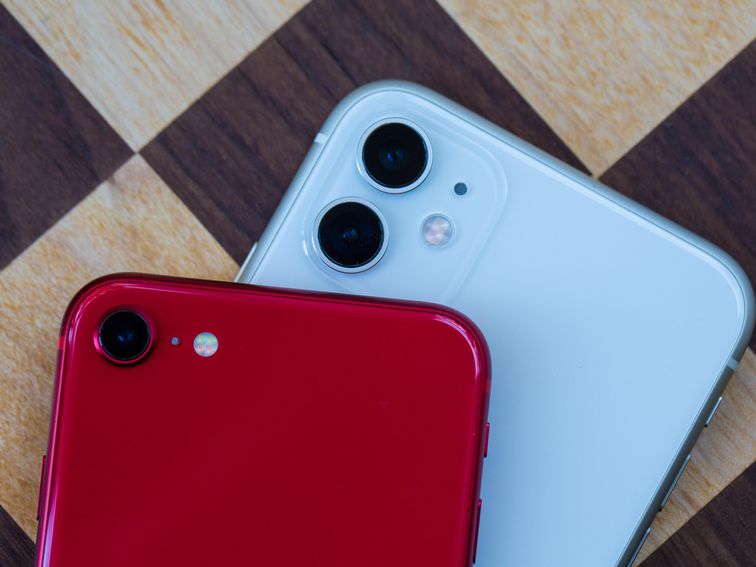 iPhone SE vs. iPhone 11: Comparing cameras from both phones

Despite the overall approval of Apple’s $399 price tag for its new iPhone SE, there was a lot of speculation about the camera hardware and how it compares to the iPhone 11. Its rear camera has the same specs as those of the iPhone 8 from 2017, but some theorized that it might have the sensor from 2018’s iPhone XR.

It took an iFixIt teardown of the new iPhone to show that the SE was actually packing the same lens and sensor as the iPhone 8. That means all the improvements to image quality as well as the addition of features like Portrait Mode, came purely from the A13 Bionic chip. This processor is the same one found in the $699 iPhone 11.

Since both phones have the same processor, naturally I wanted to compare photos and videos. To date, the iPhone 11 phones have not only the best cameras on any iPhone, but one of the best all-around camera systems on any phone.

The iPhone SE has a lot to live up to, but as you will see, it can go toe-to-toe with its pricier Apple siblings. This comparison shows that when it comes to photography and recording videos, the real consideration isn’t the number of megapixels or number of cameras.  Instead, it’s all about the processor.

The combination of the A13 Bionic chip and iOS 13 absolutely raises the iPhone 8’s camera hardware to the next level on the SE. The iPhone SE’s rear camera has a 28mm f/1.8 lens, while the iPhone 11 has two rear cameras: a main one with a 26mm f/1.8 lens and an ultrawide-angle camera with a 13mm f/2.4 lens.

Since the 11 has an ultrawide-angle camera and the SE doesn’t, there isn’t much to compare. But here are a couple of my favorite photos that I took with the ultrawide-camera anyway

When I focused on the main cameras of each, I noticed that in good light, photos were nearly indistinguishable. Look at the pictures of a tree I took in my backyard below and you won’t be able to tell much of a difference. The iPhone SE photo is framed ever-so-slightly tighter than the iPhone 11. But in every other way (even when I zoomed into each to 100% on a large monitor) I couldn’t see any other differences.

Take a look at the photos I took of some wood slats. Again, aside from framing, it’s hard to see any difference. When I zoomed in, details from each photo were good. Both had small amounts of image noise in the shadows of the slats.

The reason photos in good light look so similar is that whether you’re on an iPhone 11, 11 Pro or the new SE, the latest version of SmartHDR is used to process and optimize details and textures. It also pushes the dynamic range as much as possible without the image falling apart.

Here is where we start to see some differences between the two phones. The photo below of a tree showcases the strength of SmartHDR processing. This scene has lighting extremes with dark shadows under the tree and bright highlights in the clouds.

Both phones have portrait mode and produce excellent results. The 11 can take portrait mode photos of people and pets while the iPhone SE can only do people, which is a big drawback if your an animal lover. With the portrait mode photos below, you’ll see that they look very similar. The iPhone 11’s portrait captures more details. For example, look at the hair on John’s forehead. Also, the falloff over the shoulders from in-focus to out-of-focus areas appears more natural from the iPhone 11 and that might be due to the fact that it uses both rear lenses to create the effect.

When we get into medium- and low-light environments, the differences between the two phones are even starker. That’s because the iPhone 11 has Deep Fusion processing which improves image quality, details and minimizes image noise. The iPhone SE lacks Deep Fusion.

The photos below are of my bike trainer taken indoors in medium lighting. Besides the tighter framing in the iPhone SE photo, there is a notable difference in terms of image quality. The photo from the 11 have a pinch more detail, like around the wall outlet.

In addition, the bottom right corner of the iPhone SE’s photo suffers from image noise in the shadows. I’d say that for indoor and medium light photos, the 11 has the edge because its use of Deep Fusion processing.

Night mode vs. no night mode

Night mode, which is on the iPhone 11 but not the SE, is another sizable difference between the two phones. Night mode uses adaptive bracketing, taking a series of images with various shutter speeds. It combines them into a single photo that is brighter, has less image noise and improved details. Like the iPhone 11’s ultrawide-angle camera, your own preferences will dictate whether having night mode is a deal-breaker. But let’s see what it can do.

Below are photos of a tree in my backyard taken when it was extremely dark. The iPhone 11 night mode looks better in every way.

But that was a pretty extreme way to test the phones. Below is a slightly brighter low-light scene of a book, an eye drop bottle and my computer. It was dim enough to trigger night mode on the iPhone 11.

As you can see if you look closely at the bottle of eye drops, the iPhone 11’s photo is sharper, has better details and color accuracy. Finally, compare the author names on the spine of the book. The text looks softer in the SE photo and the book’s spine is slightly a different color.

Take a look at the video below which contains footage filmed from both the iPhone 11 and SE.

To see more videos filmed with the iPhone SE, watch the video below.

Videos taken with the front-facing cameras, however, show a larger difference in quality. The iPhone 11 has a wider front-facing camera, and it’s capable of 4K and slow-mo videos. The iPhone SE can only shoot 1,080p video and can’t shoot “slofies.” Both can take portrait photos, but the iPhone 11 captures much more detail (in my hair and skin, for example). Some people might not miss seeing all those details in their skin.

After doing this camera comparison, it’s obvious that the iPhone 11 has a better and more versatile camera system. But in many situations, the iPhone SE was able to capture images that are as comparable and brilliant, despite being hundreds of dollars cheaper than the iPhone 11.