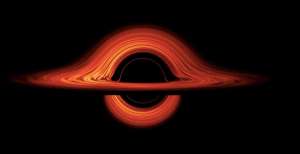 © Provided by Space Artist’s illustration of a black hole.

Paul M. Sutter is an astrophysicist at SUNY Stony Brook and the Flatiron Institute, host of Ask a Spaceman and Space Radio, and author of “Your Place in the Universe.” Sutter contributed this article to Space.com’s Expert Voices: Op-Ed & Insights.

We’re used to thinking of possible homes for life on watery worlds orbiting stars like the sun, but a new research paper has found a new potential habitat: a rocky planet orbiting just past the event horizon of a rapidly spinning supermassive black hole.

The exotic forces around that black hole are able to warm up the planet just right, but the scenario comes with a catch: the planet must orbit at nearly the speed of light. © Provided by Space Artist’s illustration of a black hole.

We don’t know all the possible places that life could arise in our universe, because so far we only have one example: us. And while scientists (and sci-fi authors) enjoy thinking about all sorts of exotic arrangements and possibilities for lifeforms, for serious searches of extraterrestrial intelligence, our best bet is to use our own circumstances as a template, hunting for life that isn’t too dissimilar to what we find on Earth.

From that, we can draw two extremely broad requirements. One, life like our own requires liquid water. Water is the most common molecule in the universe, composed of hydrogen (element No. 1 when it comes to abundance in the cosmos) and oxygen (the byproduct of fusion reactions inside stars like our sun, making it also very common). But that water is usually either vaporized into a plasma (and hence very bad for life) or locked down in its solid, frozen state as ice (also not very good for life).

The liquid stuff is harder to come by, and requires a source of heat that isn’t so hot that water just evaporates. We’ve found this perfect balance in only two kinds of locations: the so-called “habitable zone” of stars, a band of orbits where the light output it just right; and buried underneath the icy crusts of certain moons of the outer planets in our solar system, where tidal heating generates the necessary energy.

But just raw heat isn’t enough. Life is a complex process that uses energy to do interesting things (like move around, eat and reproduce). All those processes are not perfectly efficient, so they generate waste heat. This waste heat must be dumped safely away from the environment; otherwise, you end up with nightmare greenhouse scenarios, with temperatures escalating to uncontrolled levels and killing off any life that got started.

On the Earth, we dump our waste heat into the vacuum of space itself in the form of infrared radiation. This contrast, between a source of energy and a place to put all the waste, enables life to flourish on our home planet, and presumably any other planet with a similar setup.

At first glance, black holes appear to be the least inviting homes for any potential lifeforms. After all, they are objects made of pure gravity, pulling in anything that gets too close beneath their