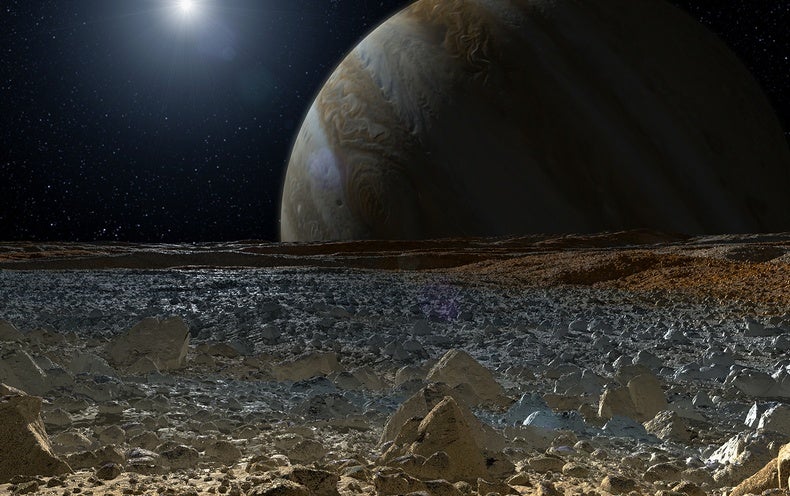 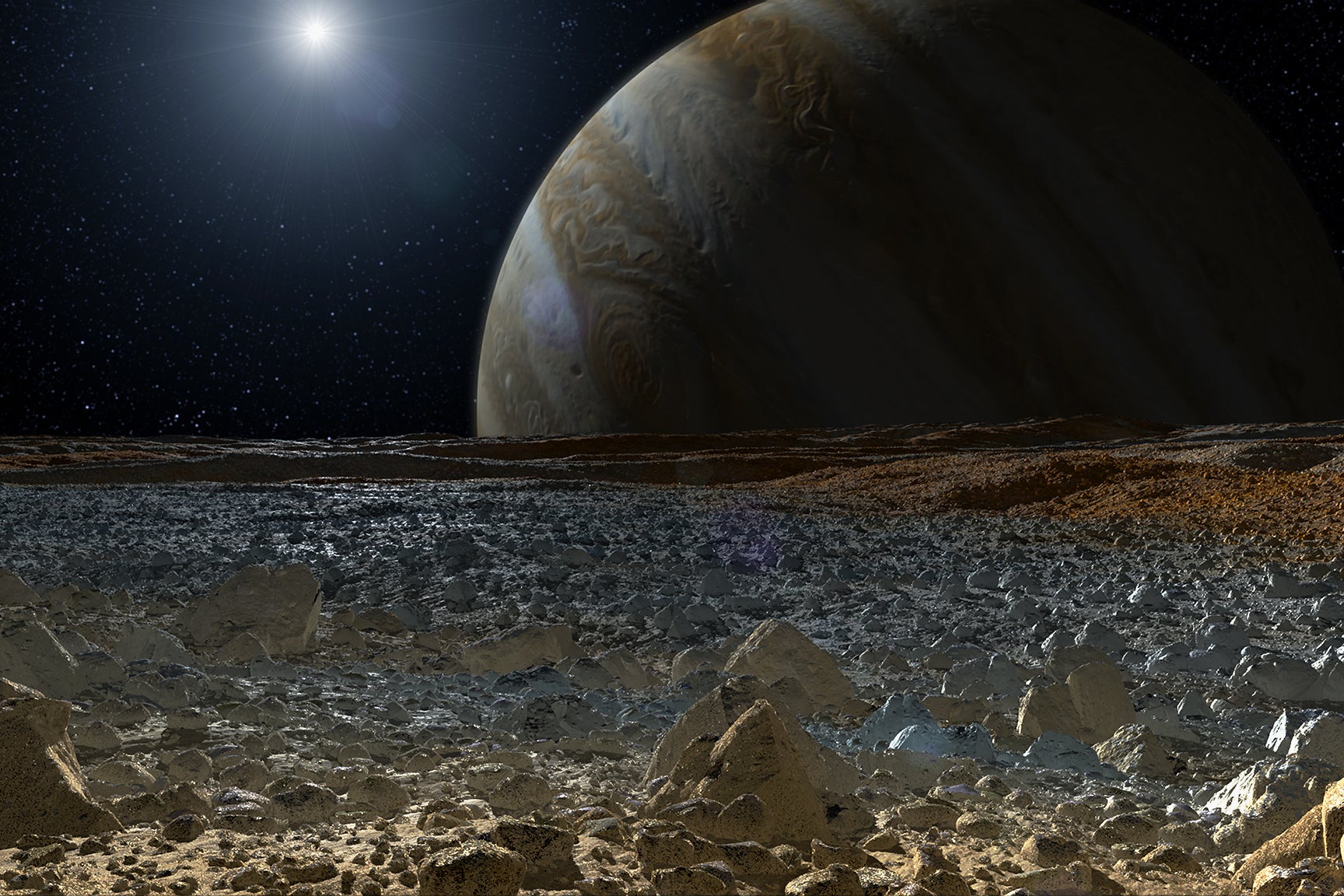 Jupiter’s four largest moons may be conspiring to maintain their subsurface oceans. Long thought to arise from heat generated by the crust-flexing pull of Jupiter, these oceans may also owe their existence to immense subsurface tidal waves generated by gravitational interactions among the moons. Measuring such tides can provide insights about the depths of these lunar abysses—environments that may offer the best chances for finding extraterrestrial life in our solar system.

Observations of Jupiter’s Galilean satellites—Europa, Callisto, Ganymede and Io—have long hinted at the presence of subsurface liquid layers. Three of the moons are thought to have a water-rich mantle, while Io may instead have a magma ocean driving its extreme volcanic activity. As the moons move around the planet, its gravitational tugging on their interior and the heat from the slow decay of radioactive elements have kept the liquid material from solidifying.

Less attention has been paid to how the moons pull at one another. All objects in the universe exert a gravitational tug in proportion to their mass, and it attenuates across distances. Jupiter, for instance, pulls on Earth but is so far away that the effect is negligible. Because of their small size, the Galilean satellites’ tug on one another has long been considered irrelevant as well.

When Hamish Hay, then a graduate student at the University of Arizona, found himself working on a side project involving the tidal pull of exoplanets, he began to wonder more about the way an ocean layer could change the equation. Hay, now a researcher at NASA’s Jet Propulsion Laboratory, decided to look at the tides of the ocean-rich Galilean moons.

To his surprise, he found that when the orbits of the natural satellites lined up just right, their relatively small pull could be amplified by the behavior of their oceans. Under those special conditions, known as resonances, the tidal effects could grow significantly larger, even exceeding those produced by the much more massive Jupiter.

“It’s quite interesting because the effects can be strong,” says Mikael Beuthe, who studies subsurface oceans at the Royal Observatory of Belgium. Beuthe reviewed Hay’s study but was not directly involved in the work.

High Seas in the Dark Below

When NASA’s Voyager 1 spacecraft arrived at Jupiter in 1979, it spotted volcanic plumes rising from Io that hinted at a buried magma ocean. Further observations from Voyager 1 and other missions showed telltale fissures on the surface of Europa, revealing the icy moon’s crust was more active and mobile than previously realized, likely because of a subsurface ocean. In recent years such oceans have been found on many other worlds—even tiny, cold Pluto may boast one. Ocean worlds seem to be widespread, and many scientists suspect Ganymede and Callisto house their own deep, watery inner layers.

The oceans of Jupiter’s moons differ from those found on our planet. Whereas Earth’s oceans have an average depth of about 3.7 kilometers—and plunge to 11 kilometers at their deepest point in the Mariana Trench—the Galilean satellites’ oceans are thought to reach hundreds of kilometers. That arrangement gives them an advantage for tidal changes. “Thick, [or deep], oceans … can respond very quickly to tidal effects,” Hay says.

The speed of a wave is controlled by the depth of its ocean, because a thick liquid reservoir can change more quickly than a thin one. It seems counterintuitive, but a shallow ocean must push water from a wider region to form a wave as high as one created by a smaller area on a deep-ocean world.

Enter resonances, which behave somewhat like a child on a swing. A push at just the right moment in the swing’s arc—or, in actuality, at the proper point in a moon’s orbit—can give the swing a much greater boost than a push at another time. Spurred by resonances stirred up by the pull of its Galilean neighbors, each moon’s liquid layer sloshes around higher and faster than it would otherwise. The resulting tidal waves surge through that moon’s subsurface, never crashing against continents but instead continuing in a perpetual wave front that extends across half of the natural satellite’s circumference.

Resonances raised by Jupiter would be most potent in seas that are only a few hundreds of meters deep—an unrealistic assumption for the Galilean oceans. The moons, however, can trigger resonances in deeper oceans as they twirl in their orbits, making the resulting waves more likely to surge higher than those caused by the planet itself.

According to Hay, this intramoon tidal pull should manifest most strongly near each Galilean satellite’s equator, potentially allowing water or magma to push through more easily there. Greater levels of geologic activity at the equators could therefore be a possible signal of strong moon-on-moon tides. Observations already tentatively support this scenario, although many other possible explanations exist for apparent enhancements to equatorial upwelling. Much of Io’s volcanic activity seems to happen near its equator rather than its poles, although Hay cautions that appearance could be a result of observational bias: the equatorial region has been imaged more frequently than the poles. NASA’s Juno mission is in the process of changing that imbalance and should provide more insights about Io’s polar regions. That information is expected to help to determine the true frequency and distribution of the moon’s volcanoes. Europa also appears to have an especially jumbled “chaotic terrain” near its equator that could come from material being squeezed to the surface by the tides.

Eventual measurements of the strength of any Galilean tides should be straightforward, however. Above the waves, a moon’s crust rises and falls by several meters, too—much like the deck of a ship on a storm-tossed sea. That movement could allow spacecraft such as the European Space Agency’s Jupiter Icy Moons Explorer (JUICE) to measure the surges caused by resonant tides.

Toward the end of its multiyear mission in the Jovian system, which is slated to begin in late 2029, JUICE will orbit Ganymede in hopes of determining whether or not the moon has a liquid ocean. Mission scientists already plan to measure Ganymede’s tidal amplitudes with two of the spacecraft’s instruments: 3GM and GALA. “If there are dynamical tides due to resonances, the signal due to moon-moon tides will be even more detectable,” says 3GM’s principle investigator Luciano Iess, who was not part of Hay’s study. Hauke Hussmann, principle investigator of GALA, who was also not involved in the paper, says that his instrument should be able to spot changes caused by the moons.

NASA’s Europa Clipper spacecraft, another mission slated to study Jupiter’s icy moons, may not be able to match JUICE’s measurements. According to Clipper team member and Stanford University geophysicist Gregor Steinbrügge, the spacecraft’s ice-penetrating radar will be capable of measuring the large tidal deformations caused by Jupiter but will struggle to see the subtler, more transient effects of intramoon tides.

If either mission manages to properly measure the rise and fall of the crust on a Galilean moon, those data could help in determining the depths of that moon’s ocean. Because the resonance changes based on the thickness of the ocean, the frequency of the waves can provide a rough estimate. A crust that crests 20 times per Europan day would have a thinner ocean, for instance, than one that does so 21 times a day, Hay says.

By probing an oft-neglected quantity in the study of the Galilean satellites, Hay’s research has provided a new way to look at them. “We have to take this into account and do something about it,” Beuthe says. “It could be an important factor” in understanding these moons, he says.