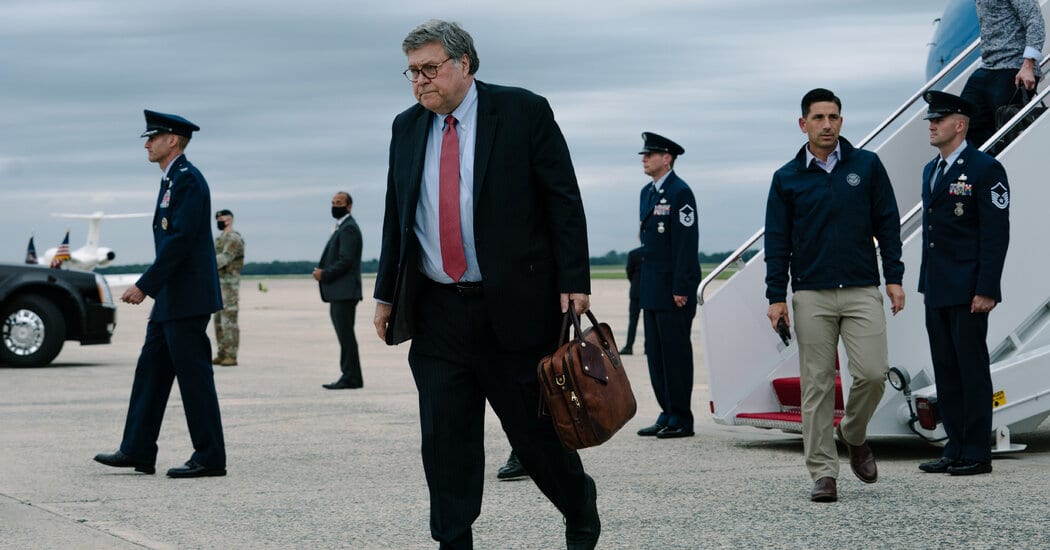 WASHINGTON — The Justice Department plans to bring an antitrust case against Google as soon as this month, after Attorney General William P. Barr overruled career lawyers who said they needed more time to build a strong case against one of the world’s wealthiest, most formidable technology companies, according to five people briefed on internal department conversations.

Justice Department officials told lawyers involved in the antitrust inquiry into Alphabet, the parent company of Google and YouTube, to wrap up their work by the end of September, according to three of the people. Most of the 40-odd lawyers who had been working on the investigation opposed the deadline. Some said they would not sign the complaint, and several of them left the case this summer.

Some argued this summer in a memo that ran hundreds of pages that they could bring a strong case but needed more time, according to people who described the document. Disagreement persisted among the team over how broad the complaint should be and what Google could do to resolve the problems the government uncovered. The lawyers viewed the deadline as arbitrary.

While there were disagreements about tactics, career lawyers also expressed concerns that Mr. Barr wanted to announce the case in September to take credit for action against a powerful tech company under the Trump administration.

But Mr. Barr felt that the department had moved too slowly and that the deadline was not unreasonable, according to a senior Justice Department official.

A former telecom industry executive who argued an antitrust matter before the Supreme Court, Mr. Barr has shown a deep interest in the Google investigation. He has requested regular briefings on the department’s case, taking thick binders of information about it on trips and vacations and returning with ideas and notes.

When Mr. Barr imposed a deadline on the investigation, some lawyers feared that the move was in keeping with his willingness to override the recommendations of career lawyers in cases that are of keen interest to President Trump, who has accused Google of bias against him.

The Google case could also give Mr. Trump and Mr. Barr an election-season achievement on an issue that both Democrats and Republicans see as a major problem: the influence of the biggest tech companies over consumers and the possibility that their business practices have stifled new competitors and hobbled legacy industries like telecom and media.

A coalition of 50 states and territories support antitrust action against Google, a reflection of the broad bipartisan support that a Justice Department case might have. But state attorneys general conducting their own investigations into the company are split on how to move forward, with Democrats perceived by Republicans as slow-walking the work so that cases can be brought under a potential Biden administration, and Democrats accusing Republicans of rushing it out under Mr. Trump. That disagreement could limit the number of states that join a Justice Department lawsuit and imperil the bipartisan nature of the investigation.

Some lawyers in the department worry that Mr. Barr’s determination to bring a complaint this month could weaken their case and ultimately strengthen Google’s hand, according to interviews with 15 lawyers who worked on the case or were briefed on the department’s strategy. They asked not to be named for fear of retribution.

Brianna Herlihy, a Justice Department spokeswoman, declined to comment on the continuing investigation. Jose Castaneda, a spokesman for Google, said that the company would “continue to engage with ongoing investigations” and that its business practices enabled “increased choice and competition.”

When the Justice Department opened its inquiry into Alphabet in June 2019, career lawyers in the antitrust division were eager to take part. Some within the division described it as the case of the century, on par with the breakup of Standard Oil after the Gilded Age. It also offered a chance for the United States to catch up to European regulators who had been aggressive watchdogs of the technology sector.

Alphabet was an obvious antitrust target. Through YouTube, Google search, Google Maps and a suite of online advertising products, consumers interact with the company nearly every time they search for information, watch a video, hail a ride, order delivery in an app or see an ad online. Alphabet then improves its products based on the information it gleans from every user interaction, making its technology even more dominant.

For nearly a year, dozens of Justice Department lawyers and other staff members worked in two groups, each overseeing a separate line of inquiry: Google’s dominance in search and its control over many aspects of the ecosystem for online advertising.

Google controls about 90 percent of web searches globally, and rivals have complained that the company extended its dominance by making its search and browsing tools defaults on phones with its Android operating system. Google also captures about one-third of every dollar spent on online advertising, and its ad tools are used to supply and auction ads that appear across the internet.

But the lawyers also described internal politics that at times slowed down the department’s work or drove a wedge among members of the team.

Makan Delrahim, the head of the Justice Department’s antitrust division, had pushed the department to investigate Google but was recused from the case because he represented the company in a 2007 acquisition that helped it to dominate the online advertising market.

In an unusual move, Mr. Barr placed the investigation under Jeffrey A. Rosen, the deputy attorney general, whose office would not typically oversee an antitrust case. Mr. Barr and Mr. Delrahim also disagreed on how to approach the investigation, and Mr. Barr had told aides that the antitrust division had been asleep at the switch for decades, particularly in scrutinizing the technology industry.

Mr. Rosen does have a tech background: He was the lead counsel for Netscape Communications when it filed an antitrust complaint against Microsoft in 2002.

In October, Mr. Rosen hired Ryan Shores, a veteran antitrust lawyer, to lead the review and vowed to “vigorously seek to remedy any violations of law, if any are found.”

Mr. Barr also had a counselor from his own office, Lauren Willard, join the team as his liaison. She met with staff members and requested information about the investigation. She also issued directives and made proposals about next steps.

The case seemed to have two leaders who were not always in sync about who was in charge, and one of them sat in the office of the attorney general.

As debates arose over how best to move forward against Google — primarily over whether to file a complaint that included both the search and advertising elements, or to focus on one line of attack — lawyers wondered who would have the last word. Mr. Barr stepped in this spring to clarify that Mr. Shores was in charge. Ms. Willard still had a hand in Google, but she stepped back from the case to focus on other assignments.

State attorneys general also disagreed on whether to bring a narrow case that could be filed during Mr. Trump’s presidency or to take more time to file a broader complaint. Attorney General Phil Weiser of Colorado, a Democrat who worked in the Obama Justice Department, drove the effort to bring a broad lawsuit, three people with knowledge of his plans said. But Attorney General Ken Paxton of Texas, a Republican, was in the advanced stages of a case focused on Google’s advertising technology and felt that it could be brought quickly.

A spokesman for Mr. Weiser declined to comment. A spokeswoman for Mr. Paxton did not immediately respond to a request for comment.

When the Justice Department this summer shared a potential approach to the case that was focused on advertising technology, several state attorneys general viewed it as too narrow for them to support, said one person who was familiar with the presentation.

Google’s lawyers hope to seize on Mr. Trump’s politicization of the matter should the Justice Department sue the company. Republican lawmakers like Senator Ted Cruz of Texas and Representative Jim Jordan of Ohio, the top Republican on the House Judiciary Committee, have accused platforms like YouTube and Facebook of censoring conservative voices.

Data from the companies undermine their claims, showing that Republicans are among the most visible figures on their services. And few figures have as much reach on social media as Mr. Trump himself.

But the president had made the accusations personal. In 2018, he said that when searching for “Trump News,” Google’s search engine turned up only reports from news organizations that he said were biased against him.

“Google search results for ‘Trump News’ shows only the viewing/reporting of Fake News Media,” he said on Twitter. “In other words, they have it RIGGED, for me & others.” He also said Google had potentially violated the law.

Mr. Barr recently echoed the president’s criticism and said that antitrust laws could be used to keep companies from restricting the spread of conservative views.

Many career staff members in the antitrust division, including more than a dozen who were hired during the Trump administration, considered the evidence solid that Google’s search and advertising businesses violated antitrust law. But some told associates that Mr. Barr was forcing them to come up with “half-baked” cases so he could unveil a complaint by Sept. 30, according to three people with knowledge of the discussions.

Some lawyers who felt they needed more time laid out their concerns in the memo and left the case; about 20 lawyers remain on the team. Department lawyers said that Mr. Shores planned to slim down the team this summer. Some people also left because the coronavirus pandemic had made it hard for them to dedicate time to the case. A lawyer in the department’s civil division joined the remaining members of Mr. Shores’s team.

The department approached litigators from at least three outside law firms to take on a potential case, according to two people with knowledge of the talks. But they all declined, citing conflicts of interest and other logistical obstacles created by the pandemic.