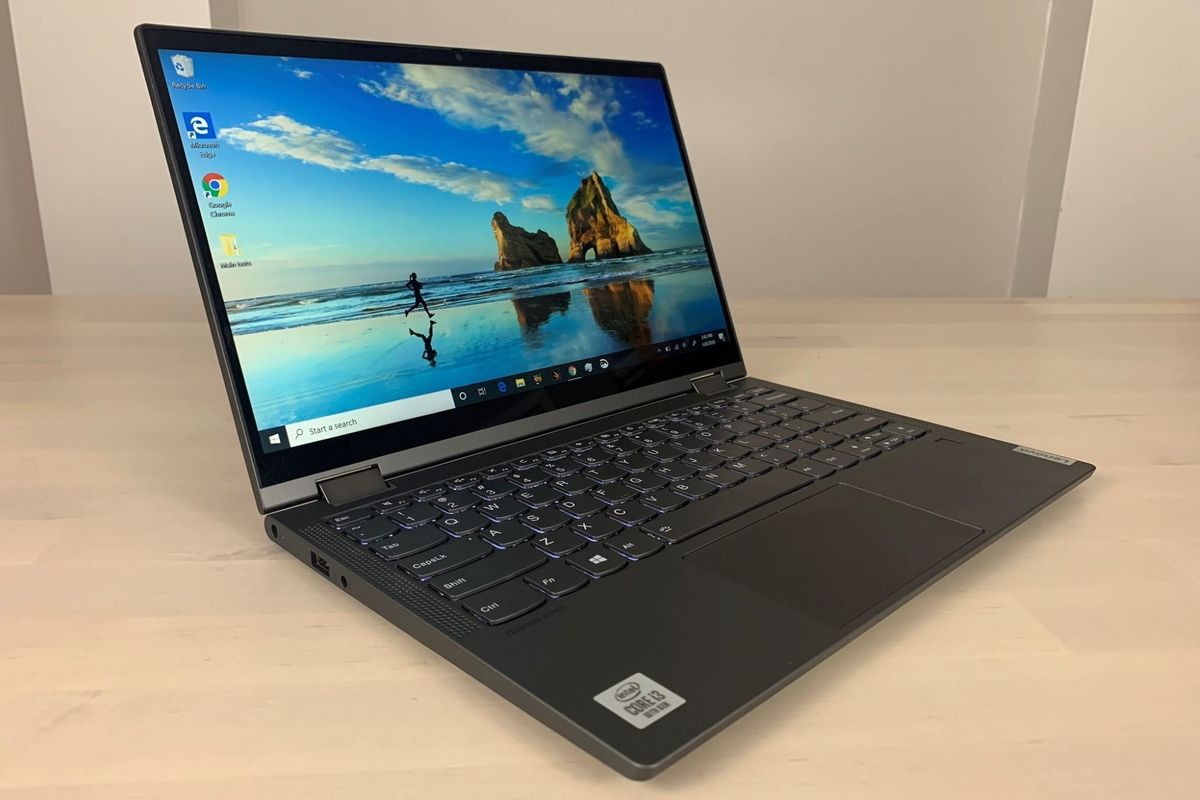 Lenovo Yoga C640 review: The battery life blows us away

At first glance, it’s easy to dismiss this particular model of Lenovo’s Yoga C640, a Best Buy exclusive with a relatively anemic dual-core i3 Comet Lake CPU, a puny 128GB SSD, and a $600 price tag. That said, this sleek convertible (officially the Yoga C640-13IML) has an ace up its sleeve: a beefy battery that just goes, and goes, and goes.

While this made-for-Best Buy system isn’t a great pick for users looking to process 4K videos or crunch big numbers (there are other Yoga C640 configurations better suited for such CPU-intensive tasks), it could be a great fit for users looking for a versatile 2-in-1 that can go all day long without an AC cord.

Our review version (81UE000WUS) of the Yoga C640-13IML isn’t listed on Lenovo’s website; instead, it’s a $600 Best Buy exclusive that’s considerably less expensive (and, consequently, less powerful) than the other three models.

Here are the details:

Overall, this a typical configuration that we see in budget laptops. The dual-core 10th-gen Comet Lake Core i3 CPU is perfectly capable of everyday computing tasks such as web browsing, Office, and light photo editing, although it’ll start to chug when it comes to demanding multi-core operations like video processing or crunching databases. The 8GB of RAM offers a decent amount of headroom for multitasking or juggling multiple browser tabs.

The 128GB SSD will get cramped awfully fast. Once you take into account Windows 10 and other apps pre-loaded onto the C640, the drive only has about 77GB of free space left. If you store a lot locally, you might want to invest in an external hard drive or cloud storage.

Physically, the 0.7 inch-thick and 2.88-pound C640 is about the same size and weight as other 2-in-1 systems in its class. The fingerprint reader is always a nice bonus. WWhile Wi-Fi 5 networking is standard for laptops in this price range, just remember that you won’t be able to take advantage of the enhanced speed and efficiency features offered by cutting-edge Wi-Fi 6 routers.

We’ve left the best for last, though: namely, the Yoga C640’s 60 Watt-hour battery, which bodes well when it comes to battery life. Later on, we’ll put the battery to the test and see whether it lives up to its promise.

The Lenovo Yoga C640 boasts the same overall design scheme as Lenovo’s other Yoga models, including its angled front edge, flat sides, and the signature Yoga 360-degree hinge. Thanks to the hinge, you can swivel the display all the way around and use the C640 as a tablet, tent it on a desk or tabletop, or sit it keyboard-down with the display angled up for kiosk mode.

The C640’s sandblasted aluminum shell did a nice job of resisting fingerprints, although I could also spot faint greasy hand smudges here and there. While the C640’s flat, nearly featureless lid (save for the Yoga logo) feels smooth to the touch, the bottom half of the chassis has a slight rubberized feel, which helps to keep the laptop from slipping out of your hand.

A couple of other design features worth mentioning include the Yoga C640’s power button, which sits on the right side of the laptop near the hinge, a position that makes it tough to press by accident.

Also worthy of note is the “TrueBlock” privacy shutter for the 720p webcam sitting in the display’s top bezel. The shutter is so subtle that it’s easy to miss, and it doesn’t offer any visual cues whether it’s open or shut. That said, the shutter is easy to slide (I had a much tougher time dealing with the shutter on the Yoga C640’s pricier cousin, the Yoga C740), and given this laptop’s budget price range, it’s a rare treat to get a webcam shutter at all.

Any budget laptop display whose brightness measures north of 250 nits (or candelas) is a plus in our book. All too often, we see bargain laptops with screens that can’t even hit that low-water mark.

Luckily, the Lenovo Yoga C640’s full-HD display, which is surrounded by slim bezels along the top and sides with a chunkier bezel on the bottom, is reasonably bright for a laptop in its price range, measuring 305 nits according to our readings. Granted, we’ve seen plenty of laptops with displays that measure well north of 300 nits (as in 400 or even 500 nits, in some cases), but they’ll generally cost you hundreds more than the Yoga C640 does.

The Yoga C640’s IPS (in-plane switching) display delivers solid viewing angles. The screen dims only slightly when viewed from the sides or the top or bottom, with no signs of inverse colors. The touch-enabled display also did a nice job of responding to my taps and swipes.

I’ve been impressed by the feel of the keyboards on other Lenovo Yoga models, and the Yoga C640’s keyboard is no exception. They’re a pleasure to type on, with a slight concave design, easy discovery, and generous travel (that is, the distance that a key moves when it’s pressed). Each keystroke delivers a crisp, tactile bump, with a refreshingly springy rebound. They keyboard offers two-step backlighting, along with hotkeys for volume, mic mute, airplane mode, Windows lock, and screen brightness. There aren’t any media playback hotkeys, unfortunately.

The Yoga C640’s touchpad sits just below the space bar, putting it slightly left of center. I had little trouble swiping and clicking the touchpad, and I never noticed any jitteriness from false inputs. Even when I intentionally brushed my palms against the bottom corners of the trackpad, the cursor remained rock-steady.

The Yoga C640’s upfiring speakers sounded pretty good for laptop speakers, with a fair amount of detail and even some subtle bass response. Even better is the Yoga C640’s support for Dolby Atmos, an object-based sound format that allows for precise sound placement in a 3D soundstage. Dolby Atmos is generally thought of as an audio format designed for theaters and home audio setups with in-ceiling speakers, but Atmos is finding its way into plenty of devices with only stereo speakers, including phones and laptops. Of course, the Yoga C640’s stereo speakers can’t approach the fidelity of a proper home theater or even external computer speakers, but the laptop’s Atmos-enabled drivers manage to deliver solid audio with an impressively wide and detailed soundstage—well, for laptop speakers, anyway.

The Lenovo Yoga C640 has a middling selection of ports. On the left side, you get the first of two USB SuperSpeed 5Gbps (formerly USB 3.2 Gen 1) Type-A ports, along with a combo audio jack and a barrel-shaped power port.

While we’re always happy to see a pair of USB Type-A ports (good for connecting, say, a mouse and a printer), along with a USB-C port (handy for newer external hard drives), we’re disappointed by the lack of a memory card reader or an HDMI port. Also missing is a slot for a laptop security cable. You’ll likely want to invest in a USB-C hub to extend your connectivity.

Keep reading for the performance benchmarks and that crazy battery life.