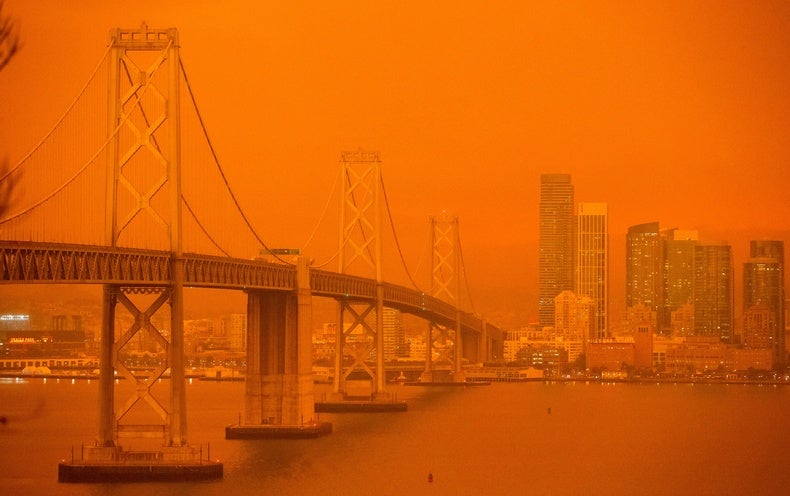 From the Mexican border to the forests of Washington State, the West Coast is ablaze. Dozens of fires have roared to life across the western states, burning millions of acres of forest and grassland. California has borne the brunt of the onslaught, with more than 3.3 million acres going up in flames so far this year. That number greatly surpasses the state’s record of more than 1.9 million acres set afire in 2018—and this year’s blazes have occurred before the prime period of the traditional wildfire season has even arrived. Six of the state’s 20 largest wildfires have ignited this year, including the largest on record: the August Complex fire, which has burned more than 877,000 acres and claimed the top spot from a 2018 conflagration called the Mendocino Complex.

Devastating fires have also erupted across Oregon, Washington State, Colorado and other Western states. Together, they have destroyed hundreds of homes, killed dozens of people and forced tens of thousands to evacuate. The blazes have also had an impact beyond the edge of the flames: smoke has poured into the atmosphere and blanketed the region, turning skies orange and making the air unhealthy to breathe.

Though the immediate causes of the fires have ranged from a rare intense lightning storm to a gender-reveal party gone awry, climate change and a century of fire suppression have helped set the stage for such massive, destructive blazes. Fire suppression strategies have left forests with a buildup of ready fuel in the form of branches, leaves and other detritus. Climate change has increased the likelihood and intensity of heat waves that can dry out those fuels, so any spark can quickly explode into an inferno.

Here, we feature photographs showing the effects of the recent weeks’ wildfires on the landscape and people of the West.

Aircraft drops fire retardant on a ridge during the Walbridge fire, part of the larger LNU Lightning Complex fire, as flames spread in Healdsburg, Calif., on August 20, 2020. Such aircraft are a key part of the firefighting response in the West, though planes often cannot fly when winds are strong, making it harder to bring fires under control.

In this aerial view from a drone, people walk through a mobile-home park destroyed by the Almeda fire in Phoenix, Ore., on September 10, 2020. Hundreds of homes in the city were lost to the flames. The fires raging around the state have burned more than one million acres, or about twice the area that has burned each year over the past 10 years, Governor Kate Brown said.

Firefighters light a backfire near the Berry Creek area of unincorporated Butte County in California on September 9, 2020. Such backfires are used to burn grass and leaf litter ahead of the advancing flames to deprive them of fuel and arrest their progress. The Bear fire, part of the North Complex fire, was propelled by strong winds and tore through Berry Creek, leaving several dead.

Artist Marcia Ritz, age 77, walks through the rubble of her home in the Spanish Flat Mobile Villa trailer park in Lake Berryessa, Calif., on August 27, 2020. It was one of hundreds of structures destroyed by the Hennessy Fire, part of the LNU Lightning Complex fire, on August 18. Ritz and her husband Jerry Rehmke, 80, survived the fire by sheltering with nine others aboard a pontoon boat on the lake as the flames raced through the area. The fire was one of several ignited by a rare intense lightning storm that moved over Northern California.

Red flames of the Grizzly Creek fire glow against mountains tinged purple in the night sky in Glenwood Canyon, Colo. The fire began on August 10 and kept part of Interstate 70 closed for two weeks. It was initially fueled by hot, dry, windy weather that plagued the state in August—the hottest August on record in parts of Colorado and other western states. Such heat extremes have become both more likely and more intense because of climate change. A sudden shift in the weather in early September brought snows that helped to tamp down the fires burning across the state.

Firefighter douses flames from the Creek fire as they push toward homes in the Cascadel Woods area of unincorporated Madera County in California on September 7, 2020. The blaze was ignited on September 4, and by September 13, it had burned through more than 201,000 acres.

A sun tinted orange by smoke from wildfires in Oregon and southern Washington State sets behind a hill in Kalama, Wash., on September 9, 2020. The smoke has also made the air unhealthy to breathe across a large swath of the West. The smallest particles can make their way deep into the lungs, where they can exacerbate existing lung conditions, such as asthma. Residents have been advised to stay inside and keep their windows closed, even during a heat wave and the pandemic of COVID-19, which spreads more quickly when people gather indoors.

Person who did not want to give his name contemplates the view from San Francisco’s neighborhood of Embarcadero as smoke from the northern California wildfires turns the skies an orange-red on September 9, 2020. A stable layer of cooler, moist air from over the ocean keeps the smoke aloft, where particles filter out wavelengths of the sun’s rays, leaving only the orange-red part of the spectrum to shine through.