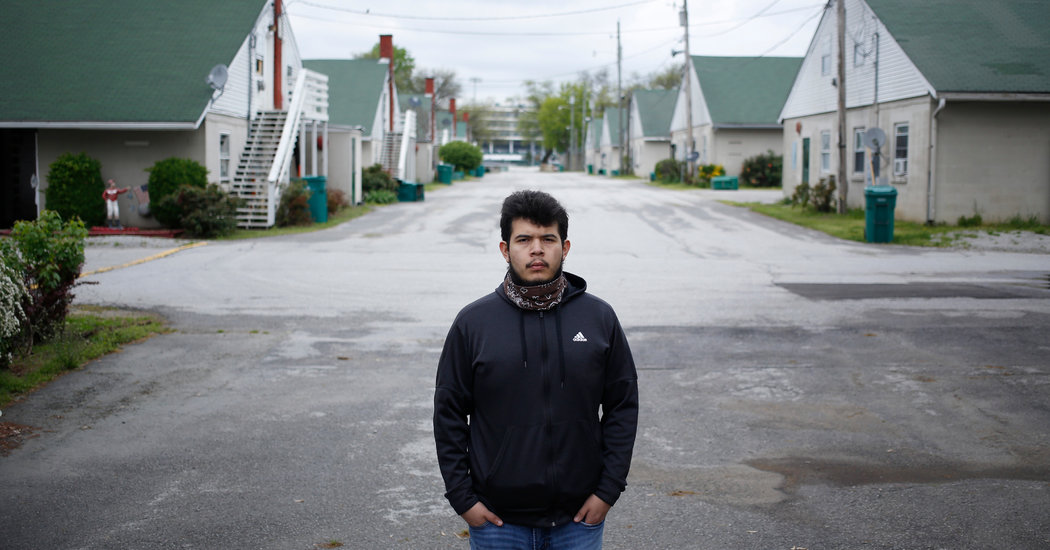 The people behind a nonprofit that helps workers at the famed Churchill Downs racetrack in Louisville, Ky., had spotted a great opportunity.

With the city’s schools closed because of the coronavirus, some of the workers at the racetrack needed fast internet access for their children. And Charter, an internet provider in the area, was offering two free months of service to any household with a student or a teacher.

One by one, the nonprofit helped sign up families — more than 30 in total.

Then the bills started showing up.

One family that had signed up got a notice in the mail that it owed $120. Another saw a debt appear in its account on the Charter website. Another family got a notice that it owed roughly $75, including for phone service it didn’t get.

“This is a fear for our families,” said Isai Sanchez, 22, the youth program coordinator at the nonprofit, the Backside Learning Center. “Like, ‘How am I supposed to pay $120 right now for a service that I can’t afford?’”

One of Mr. Sanchez’s colleagues called Charter, which provides service under the Spectrum brand name, to ask about some of the surprise charges. The company eventually cleared some of the bills, blaming a miscommunication.

Internet providers like Charter and Comcast have introduced offers of free and low-cost internet with great fanfare in the last several weeks. The companies have said they want to help connect poor Americans during a pandemic that has shifted much of life online. Schools and community organizations have aggressively promoted the offers. Scores of customers have tried to sign up.

But people signing up for the programs have encountered unexpected difficulties and roadblocks, according to interviews with people who have tried to sign up or who have helped them. Their stories highlight the way that the pandemic has stretched the gap between Americans who have easy access to the internet and those who do not, cutting the latter group off from venues for learning, work and play.

The benefits and rules of the offers vary widely, so a customer may not qualify for free service while someone in identical circumstances elsewhere in the country can sign up. Sometimes, people must endure hourslong waits on the phone to sign up, which can lead some to give up before they ever talk to a customer service agent. Others have been deterred by language barriers or are wary of requests for identification.

Several large broadband companies, including Comcast, Charter and Altice, which operates Suddenlink and Optimum, initially said a household could not sign up if it had an unpaid bill for earlier service. They pulled back that requirement when reporters and politicians questioned it.

“We need a more stable solution that doesn’t have all the gaps in eligibility and delivery that these free and reduced offers provide us,” said Angela Siefer, the executive director of the National Digital Inclusion Alliance. Ms. Siefer supports a federal subsidy that would go directly to consumers to pay for home broadband.

Rich Ruggiero, a Charter spokesman, said the company had moved quickly to offer solid connectivity to Americans who did not have it. In March, 119,000 households signed up for its offer of 60 days of free service to teachers and students, the company reported. Mr. Ruggiero said the company expected as many as 400,000 new families to sign up by the end of June.

Charter has worked around the clock to handle the interest in new and discounted services, Mr. Ruggiero said, “as a way to help connect these families quickly and safely during this challenging time.” He said he couldn’t speculate about the situation in Louisville.

A Comcast spokesman, Charlie Douglas, said the company had “the nation’s largest and most comprehensive broadband adoption program for low-income Americans.”

“We’ve been working on the challenge of tackling the digital divide” for nearly a decade, he said.

Customers are often left scrambling to figure out what offers are available for them. Charter’s program, for example, is aimed at students and teachers, while Comcast, the country’s largest internet provider, is offering free service to a variety of low-income groups, including those with subsidized housing or a veteran’s pension.

In addition, the companies do not serve all parts of the country.

Leah Christen of Fayette, Maine, near Augusta, heard that a cousin who lives an hour away had gotten a deal on internet service from Charter. She started making calls to find out if she could, too.

Last year, Ms. Christen, 36, broke a disc in her back, which made it impossible to go back to her job as a technician in a nursing home. With an infant daughter at home, she started to take classes at a community college to become a certified medical assistant.

Ms. Christen’s training and study groups were being held online, but she had no internet connection at home.

Charter said its service did not reach her home. Then she tried AT&T, which was offering two months of free service during the pandemic. An agent asked for her address, put her on hold for 15 minutes and returned to say the company’s service couldn’t reach her, either. (AT&T does not offer home internet service in Maine.)

“I’m not in the middle of nowhere,” Ms. Christen said. “I’m a half-hour from our capital, and I can’t get service.”

Some customers have found that no one from the internet providers can speak with them in their primary language. The companies generally offer information about the programs in English and Spanish, posing a problem in places with large immigrant populations, said officials in school districts around the country that have encouraged families to sign up for the deals.

Mr. Douglas, the Comcast spokesman, said information about its coronavirus response was available in 27 languages. The company’s call centers can use an on-demand translation company to speak to customers, he said.

But getting through to a person can also be a problem. In Louisville, Mr. Sanchez said he had waited on hold for six hours when trying to sign up one family. Marlon Styles, the superintendent of the Middletown City School District near Dayton, Ohio, said demand for the free service was “significantly higher than the capacity of our providers.”

What happens after a free service offer ends can be another source of confusion.

Kimberlyn Barton, a part-time student at the University of Texas in Austin whose classes moved online, spent a recent week looking for affordable broadband service before she moves into a new apartment.

Ms. Barton, 36, is eligible for a federal broadband subsidy for low-income people and received emergency funding from the university to help pay for internet. When she called Charter, which services her new apartment, an agent told her about the company’s offer for students. But then the agent said the monthly cost would be $49 for the nine months after the offer ended and eventually go as high as $69, more than Ms. Barton was able to pay.

Mr. Ruggiero, the Charter spokesman, said that in addition to its internet service that starts at $49.99 a month, Charter offered a low-cost plan to people on certain forms of public assistance.

Ms. Barton expected to go with a cheaper AT&T plan.

When customers do get service, it can change the way they are able to work and their children are able to learn during the pandemic.

With that in mind, Mr. Sanchez, the youth mentor in Louisville, has spent recent weeks teaching himself to refurbish old laptops and distribute them to the children of workers.

Some of the families the center has signed up for internet service have used it to fill out their census forms.

Students have logged on to do their work “rather than wait to go to school, get on the bus, go to the library,” Mr. Sanchez said. “And since libraries are closed, it’s like, where else can you go?”