The Samsung Galaxy Tab S6 Lite looks a lot like the Galaxy Tab S6 (Review) from the front, but with a slightly smaller 10.4-inch display. It has thick bezels, which is acceptable for a tablet of this size. At 7mm thick, the Galaxy Tab S6 Lite is actually slimmer than some of the smartphones I’ve recently reviewed. This tablet weighs 467g which is definitely noticeable when using it for prolonged durations with one hand. However, I did find two handed use to be comfortable.

Samsung has opted for a metallic finish which makes the device feel premium. The Galaxy Tab S6 Lite is available in three colours – Angora Blue, Oxford Gray, and Chiffon Pink – of which, we have the latter. To my eye, it looks more like rose gold than pink.

The Galaxy Tab S6 Lite has a 3.5mm headphone socket at the top along with a secondary microphone and a top-firing speaker. The power button on the right can also be used to activate Bixby. The SIM tray is slightly lower and can accept one Nano-SIM and a microSD card. The lower right half of the tablet has magnets to keep the included S Pen stylus attached. This version of the S Pen does not have Bluetooth, like the one that comes with the Samsung Galaxy Tab S6.

The left side of the tablet is bare but there are magnets if you wish to use optional accessories, such as a Book Cover case. At the bottom, the Galaxy Tab S6 Lite has a USB Type-C port and a second speaker. There’s only a single rear camera on this tablet unlike the dual cameras on the Galaxy Tab S6. There are antenna lines running around the top and bottom. The Samsung logo is smack in the middle of the rear, along with ‘Sound by AKG’ on the lower half. In addition to the S Pen, Samsung ships a 7.75W charger in the box.

The Samsung Galaxy Tab S6 was a powerful device, thanks to its Qualcomm Snapdragon 855 SoC. However, in order to hit a lower price, Samsung has used its own Exynos 9611 SoC, which we’ve seen in its entry-level smartphones such as the Galaxy M21 (Review). The tablet also has 4GB of RAM and 64GB of storage. Storage can be expanded by up to 1TB using a microSD card.

The Galaxy Tab S6 Lite packs in a 10.4-inch TFT LCD screen with a 2000×1200 pixel resolution. Since it’s not an AMOLED panel like you get with the Galaxy Tab S6, content doesn’t look as vivid and colours aren’t as punchy as I would have liked. Surprisingly, there’s no fingerprint scanner. The Galaxy Tab S5e (Review) had a side-mounted one while the Galaxy Tab S6 has an in-display one. You do get face recognition, though. The LTE model, which I have for review, supports 4G data connectivity as well as calling. Other connectivity options on the Galaxy Tab S6 Lite include Bluetooth 5, dual-band Wi-Fi ac, and four satellite navigation systems. You also get the usual suite of sensors. This tablet packs in a 7040mAh battery and comes with a 7.75W charger in the box.

Samsung ships the Galaxy Tab S6 Lite with One UI 2.0 running on top of Android 10. My review unit had the March security patch. If you have used any recent Samsung smartphone, you’ll feel at home with this tablet. The interface is near-identical to what you’d see on Samsung smartphones, with certain elements scaled up for the big display, such as the dialler and the quick toggles.

It also allows you to run two apps side by side and have up to five apps in pop-up mode. The Galaxy Tab S6 Lite uses traditional Android navigation buttons at the bottom of the display but you do have the option to switch to gesture-based navigation. Samsung’s Smart Stay feature keeps the display on as long as you are looking at it.

There isn’t a lot of bloatware installed on the device, which is a good thing. You get a few Samsung, Google and Microsoft apps pre-installed along with Netflix and YouTube Music. Samsung has tied up with Google to offer four months of YouTube Premium with the device.

The standard S Pen features such as Air Command and Samsung Capture are supported on the Galaxy Tab S6 Lite. If you press the button on the S Pen when it’s near the display, you’ll be able to bring up a floating menu with shortcuts for Smart select, Smart write, Live messages, AR doodle, and Notes. You can also add shortcuts to your favourite apps here.

Let’s start with the display and stereo speakers. The panel that Samsung has used for the Galaxy S6 Lite is decent, but I was expecting better. It has good viewing angles but it doesn’t get very bright. It’s also fairly reflective outdoors. I couldn’t find a way to tweak the colour profile, which is unfortunate. Audio output is good and you get stereo sound when viewing content in landscape mode. There is Dolby Atmos too which makes a noticeable difference when enabled.

The S Pen lacks Bluetooth, so it can’t be used as a remote shutter button for the camera, which is possible on the Galaxy Tab S6. You can, however, press the button and tap the display with the S Pen when the tablet is in standby to take notes quickly. 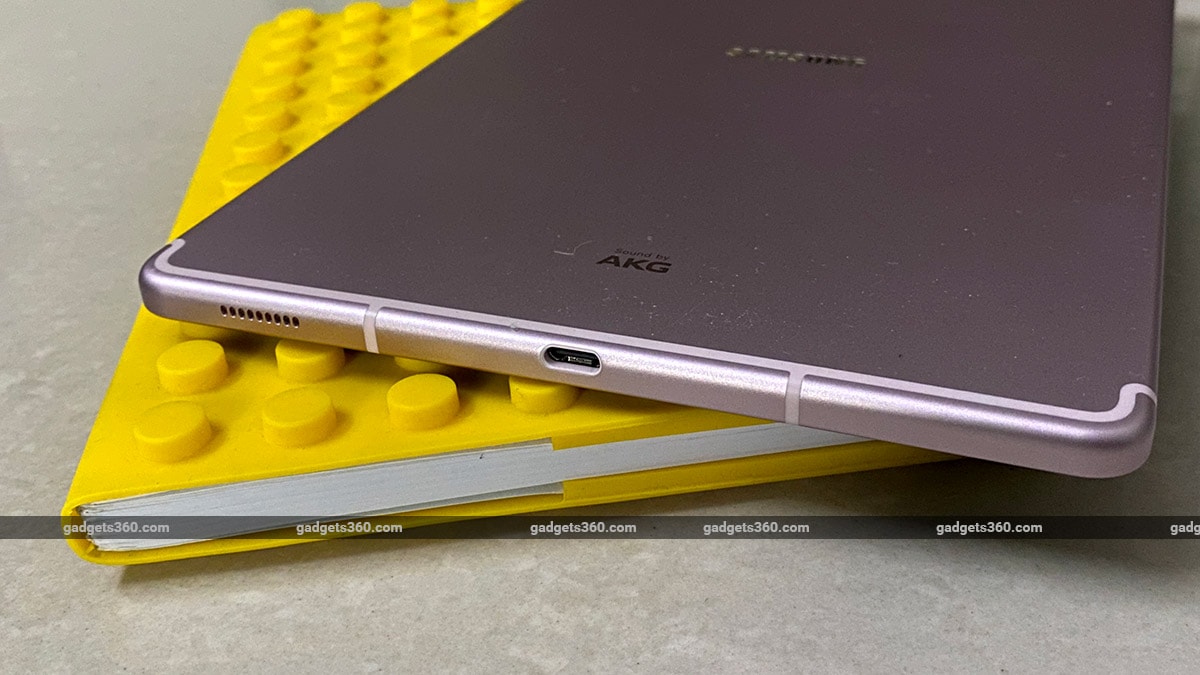 The Galaxy Tab S6 Lite is quick to wake, and you can start writing immediately. I found palm rejection to be excellent, and you can place your palm on the big display while writing using the S Pen. There is handwriting recognition in the Notes app which lets you convert whatever you’ve scribbled into text.

Multitasking on the tablet was a breeze, and 4GB of RAM was enough to keep the majority of apps in memory. Split screen worked well and even after opening five pop-up windows at the same time, the tablet was still responsive. One thing that didn’t work as advertised was face recognition. It failed most of the time during my review, forcing me to fall back to a PIN.

With my basic usage of watching YouTube videos and playing games such as Clash Royale and Idle Miner Tycoon, the Galaxy Tab S6 Lite worked very well. I did not see any signs of lag although heavier apps and games took longer than expected to load. Asphalt 9: Legends ran at the default settings and was playable but I did see occasional stutter in a few races. The Galaxy Tab S6 Lite is capable of handling casual gaming, but does not provide the best experience in heavy games.

I used a cellular SIM to connect to the Internet without Wi-Fi. I could also make calls using the tablet, and these were routed to the stereo speakers by default. This isn’t ideal as anyone nearby can hear the conversation pretty easily. You can connect a wired or Bluetooth headset for calls. My typical usage pattern allowed the Galaxy Tab S6 Lite’s battery to last two days without needing a recharge . The 7,040mAh battery does not require frequent charging. The supplied charger is very slow. I was able to get just a 29 percent charge in one hour. Charging it completely takes well over three hours. The Galaxy Tab S6 Lite ran for 11 hours and 40 minutes in our HD video loop test, which is similar to the amount of time I got with the Galaxy Tab S6.

Coming to the cameras, the Galaxy Tab S6 Lite has a single 8-megapixel rear camera and a 5-megapixel front-facing camera. I don’t see a lot of people using such a large tablet as a serious photography tool, but if you have to, then the Galaxy Tab S6 Lite manages good photos in daylight with adequate details. The selfie camera will likely be used a lot more and I did make a couple of video calls on this device. The camera offers decent quality and I did not hear any major complaints from the people I chatted with.

Since the camera is at the top of the display, it’s easy to accidentally block it when holding the tablet in landscape mode. For video calls, I found the field of view to be narrow, which forced me to keep the tablet at a distance when chatting.

The Galaxy Tab S6 Lite is yet another Android-powered tablet from Samsung, and there isn’t a lot of competition these days. It is built well and offers solid battery life. The S Pen stylus is a neat add-on, and is thankfully included in the box.

There are however a few compromises that dampen the overall experience. Considering that it is part of the Tab S series, I would have liked better features and a little more power. Priced at Rs. 27,999 for the Wi-Fi variant and Rs. 31,999 for the LTE variant, the Galaxy Tab S6 Lite is a tad expensive for what it offers.

If you don’t need a lot of storage, the Apple iPad 2019 (Review) is an alternative. However, if you want an Android tablet and don’t mind spending a little extra, the Galaxy Tab S5e (Review) is also available, and offers a more powerful processor, an AMOLED display and quad-speakers.