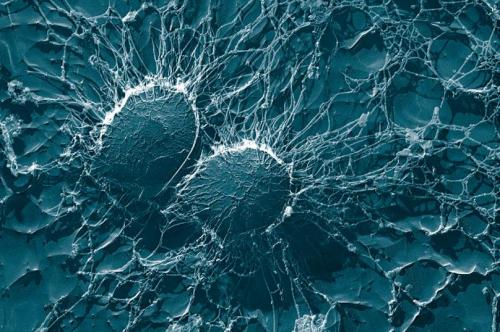 Scientists tested the new antibiotics against Staphylococcus aureus, a drug resistant bacteria that can cause a variety of dangerous infections in humans.

Scientists have discovered a new kind of antibiotics that take a unique approach to attacking and killing bacteria.

The newly discovered antibiotic compound, corbomycin, as well as its relative complestatin, interfere with the functionality of the bacterial cell wall — a previously unknown method of attack.

Both of the compounds belong to a family of antibiotics known as glycopeptides, which are synthesized by soil bacteria.

In the lab, scientists successfully used the two antibiotics to protect mice from the drug resistant bacteria Staphylococcus aureus. Researchers described the breakthrough this week in the journal Nature.

“Bacteria have a wall around the outside of their cells that gives them shape and is a source of strength,” Beth Culp, the study’s first author and a doctoral candidate in biochemistry and biomedical sciences at McMaster University in Canada, said in a news release. “Antibiotics like penicillin kill bacteria by preventing building of the wall, but the antibiotics that we found actually work by doing the opposite — they prevent the wall from being broken down. This is critical for cell to divide.”

Cells are programmed to grow, divide and expand. If cells can’t break down their walls, they can’t grow.

“We hypothesized that if the genes that made these antibiotics were different, maybe the way they killed the bacteria was also different,” said Culp.

In collaboration with researchers at the University of Montreal, Culp and her colleagues at McMaster used advanced imaging to watch the effects of the two antibiotics on drug resistant bacteria cells. The images confirmed that the two glycopeptide compounds attack the cell wall.

“This approach can be applied to other antibiotics and help us discover new ones with different mechanisms of action,” Culp said. “We found one completely new antibiotic in this study, but since then, we’ve found a few others in the same family that have this same new mechanism.”