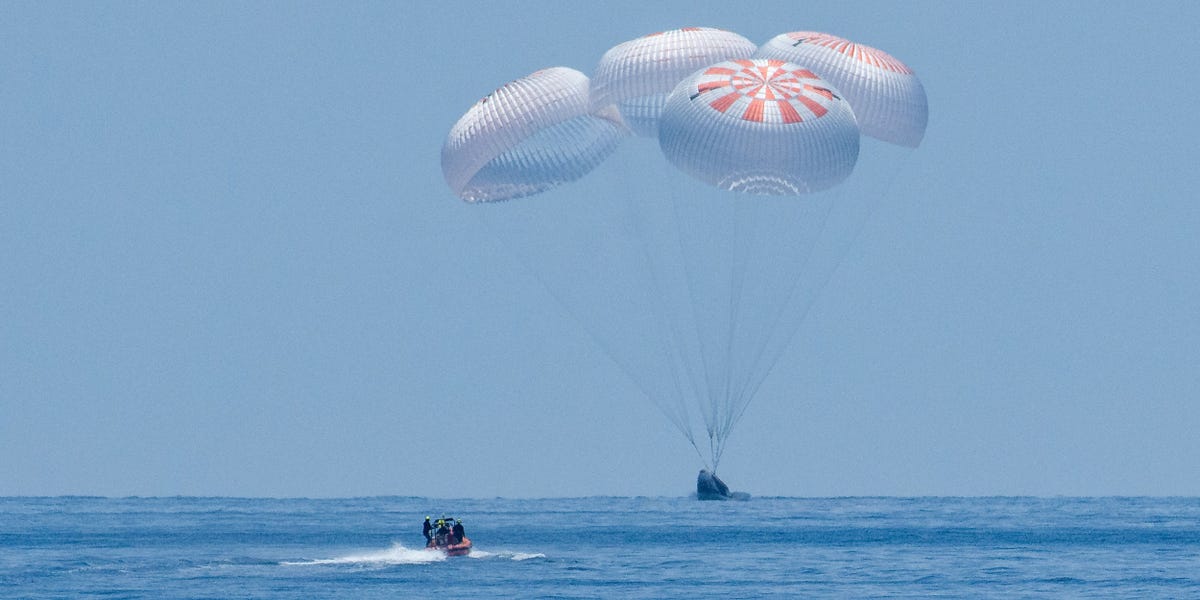 SpaceX just achieved a feat that even CEO Elon Musk thought improbable when he founded the rocket company in 2002: flying people to and from space.

On Sunday afternoon, NASA astronauts Bob Behnken and Doug Hurley safely careened back to Earth after a 27-million-mile mission in orbit around the planet. The men flew in SpaceX’s new Crew Dragon spaceship, landing the cone-shaped capsule at 2:48 p.m. ET in the Gulf of Mexico near Pensacola, Florida.

Ahead of the landing, the crew undocked from the $150 billion International Space Station, where they’d spent 63 days, then performed a series of maneuvers to return home to their families. The capsule handily survived a blistering 3,500-degree-Fahrenheit return through Earth’s atmosphere, a high-stakes parachute deployment, and the final splashdown.

Shortly after 4 p.m. ET, a SpaceX and NASA recovery crew pulled the astronauts from their toasted ship.

“Thanks for doing the most difficult part and the most important part of human spaceflight: sending us into orbit and bringing us home safely,” Behnken said shortly before leaving the spaceship, which he and Hurley named Endeavour. “Thank you again for the good ship Endeavour.”

“It’s absolutely been an honor and a pleasure to work with you, from the entire SpaceX team,” a capsule communicator responded from mission control at SpaceX’s headquarters in Hawthorne, California.

SpaceX privately designed, built, and operated the vehicle with about $2.7 billion in contracts from NASA’s Commercial Crew Program. The money helped SpaceX create its newfound spaceflight capability and is funding about half a dozen missions — including Behnken and Hurley’s demonstration flight, Demo-2, which launched on May 30.

With Demo-2’s completion, SpaceX has put an end to a nine-year drought of crewed spaceflight from US soil. The company also resurrected NASA’s ability to reach the ISS, where the agency hopes to ramp up work to help it return humans to the moon and eventually reach Mars.

“These are difficult times when there’s not that much good news. And I think this is one of those things that is universally good, no matter where you are on planet Earth. This is a good thing. And I hope it brightens your day,” Musk said during a NASA TV broadcast after the landing.

“I’m not very religious, but I prayed for this one,” he added.

The mission’s end likely brings SpaceX just weeks from a NASA certification of its Crew Dragon for regular flights of astronauts — and private citizens.

“We don’t want to purchase, own, and operate the hardware the way we used to. We want to be one customer of many customers in a very robust commercial marketplace in low-Earth orbit,” Jim Bridenstine, NASA’s administrator, said ahead of the landing.

He added: “This is the next era in human spaceflight, where NASA gets to be the customer. We want to be a strong customer, we want to be a great partner. But we don’t want to be the only ones that are operating with humans in space.”

In a news briefing following the landing, officials and astronauts remarked on how uneventful the astronaut’s return flight was (except for a few surprises on the ground, such as civilian boats pulling up to the space capsule).

“It did not seem like this was the first NASA SpaceX mission with astronauts on board,” Michael Hopkins, a NASA astronaut who’s slated to fly on SpaceX’s next mission, Crew-1, said. “It seemed to go extremely smoothly.”

“I think we’re surprised — minorly surprised, but obviously incredibly pleased — that this went as smoothly as it did,” she said.

American astronauts, rockets, and spaceships launching from US soil

Before Demo-2, the United States hadn’t launched humans into space from American soil since July 2011, when NASA flew its final space shuttle mission.

During the following nine years, NASA had to rely on Russia’s Soyuz launch system to ferry its astronauts to and from the space station. But that became increasingly expensive.

Over time, Russia charged more and more per round-trip ticket for each NASA astronaut. The cost rose from about $21 million in 2008 (before the shuttle was retired) to more than $90 million per seat on a planned flight for October. A seat on SpaceX’s Crew Dragon, meanwhile, is projected to cost $55 million (not including NASA’s $2.7 billion in funding), according to NASA’s inspector general.

Also, with just one to two seats for NASA astronauts aboard each Soyuz flight — compared to the space shuttle’s seven — the arrangement limited American use of the ISS, which has housed as many as 13 people at once (though space-station crews are typically six people).

Most concerning to mission managers, the arrangement left NASA reliant on a single launch system. That became especially worrisome when high-profile issues arose with Soyuz over the past few years, including a mysterious leak and a rocket-launch failure that forced an emergency landing. After these incidents, NASA and other space agencies had nowhere else to turn.

With SpaceX’s successful Demo-2 flight — and the upcoming test flights of Boeing’s CST-100 Starliner spaceship — that insecure footing for US astronauts is now in the rearview mirror.

“This is the culmination of a dream,” SpaceX CEO Elon Musk told “CBS This Morning” ahead of the mission’s launch in May. “This is a dream come true. In fact, it feels surreal.”

In addition to giving NASA better access to the space station, having a spacecraft and launch system enables the agency to use the space station’s microgravity environment to conduct more science experiments — in pharmaceuticals, materials science, astronomy, medicine, and more.

“The International Space Station is a critical capability for the United States of America. Having access to it is also critical,” Bridenstine said during a briefing on May 1. “We are moving forward very rapidly with this program that is so important to our nation and, in fact, to the entire world.”

With the completion of Demo-2, SpaceX has also gained operational experience flying people to and from space for the first time. That’s hugely important to Musk, who has big plans for SpaceX.

The company plans to fly tourists into space: In February, SpaceX announced that it had sold four seats through a spaceflight tourism company called Space Adventures. Then in March, news broke that the company Axiom Space — led in part by a former ISS mission manager at NASA — had also signed a deal with SpaceX.

There’s even a flight of actor Tom Cruise aboard Crew Dragon in the works — part of a plan to film a movie aboard the ISS.

But Musk’s primary aim is to launch people around the moon, later land others on the lunar surface, then move on to establish Martian cities. His ultimate goal is to put 1 million settlers on the red planet.

NASA shares some of Musk’s ambitions to send humans back to the moon and eventually to Mars. Sending astronauts to the space station aboard the Crew Dragon represents a major milestone toward those goals.

Bridenstine also said  that he’d eventually like to see entire commercial space stations in the future.

During a briefing following the launch of Demo-2, Business Insider asked Musk if he had a message for those who ever doubted him or the company.

“To be totally frank, I doubted us, too. I thought we had maybe — when starting SpaceX — maybe had a 10% chance of reaching orbit. So to those who doubted us I was like, ‘Well, I think you’re probably right,'” Musk said.

He added: “It took us took us four attempts just to get to orbit with Falcon 1 … People told me this joke: How do you make a small fortune in the rocket industry? ‘You start with a large one’ is the punch line.”

Musk said SpaceX “just barely made it there,” adding, “So hey, I think those doubters were — their probability assessment was correct. But fortunately, fate has smiled upon us and brought us to this day.”

This story has been updated with new information. It was originally published at 2:48 p.m. ET on August 2, 2020.

Do you have a story or inside information to share about the spaceflight industry? Send Dave Mosher an email at dmosher+tips@businessinsider.com or a Twitter direct message at @davemosher. More secure communication options are listed here.