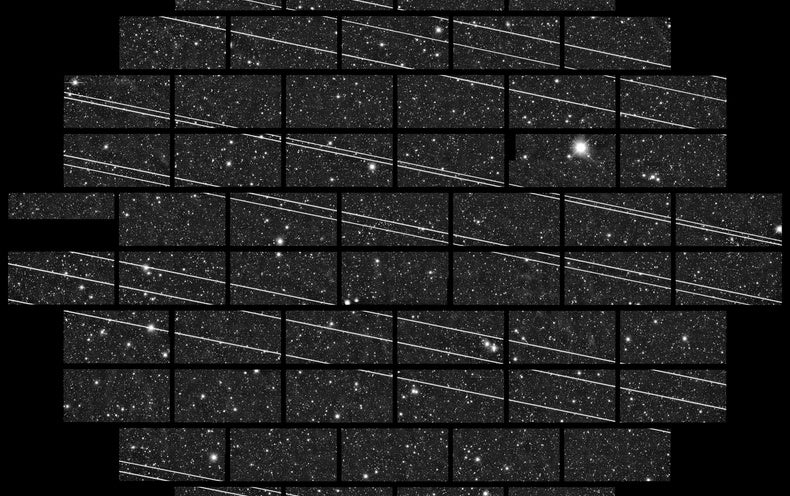 SpaceX’s Dark Satellites Are Still Too Bright for Astronomers 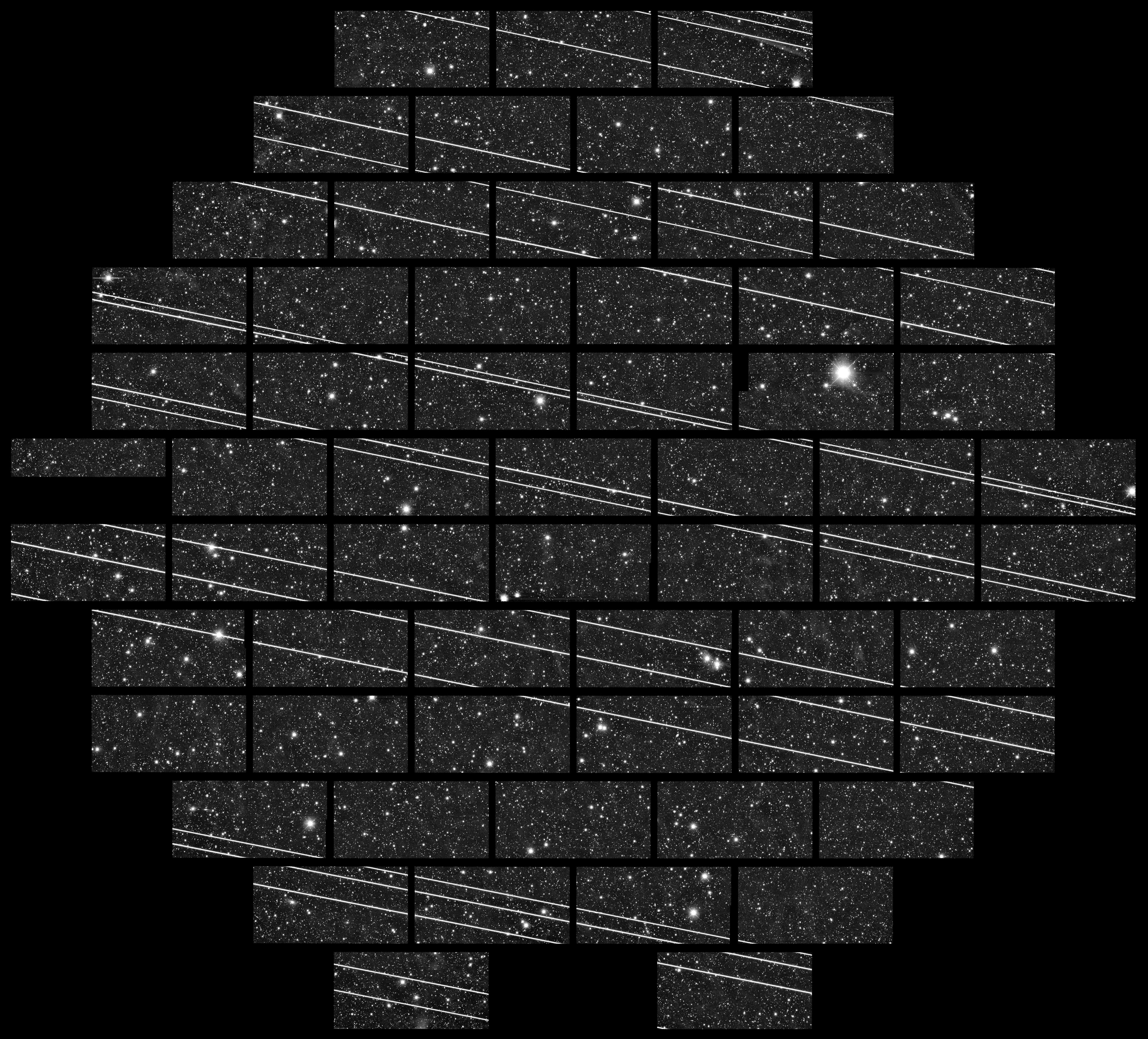 Starlink, a “megaconstellation” of hundreds of Internet satellites launched by the aerospace company SpaceX, has been causing headaches for astronomers by outshining celestial objects. Set to eventually include tens of thousands of spacecraft beaming high-speed Internet to the entire planet, Starlink has a downside for stargazing: the satellites reflect enough sunlight at night to be seen clearly with the naked eye (not to mention sensitive telescopes). Their brightness is only accentuated by the long trains they are arranged in, which pass across the heavens like dozens of glowing beads on a celestial string.

Ever since the first 60 Starlink satellites were launched in May 2019, 655 more have been placed in orbit, affecting a number of astronomical observations. Each launch has steadily held around 60 satellites, with one or two batches going up each month since January—the last did so on September 3.

Finally, in August—after more than a year of complaints from the scientific community and damage-control efforts from SpaceX—the National Science Foundation (NSF) and the American Astronomical Society (AAS) released a report on the situation. It drew from discussions among more than 250 experts at the virtual Satellite Constellations 1 (SATCON1) workshop earlier this summer to provide recommendations for both astronomers and satellite constellation operators in order to minimize further disruptions.

For now many astronomers can do little more than hope that the situation will improve. Although SpaceX’s satellites pose a problem for astronomical observations, the company does not “want to mess up astronomy,” says Meredith Rawls, an astronomer at the University of Washington. Rawls works with the upcoming Vera C. Rubin Observatory in Chile, formerly known as the Large Synoptic Survey Telescope. The project’s steady stream of panoramic images of the entire sky will help uncover the nature of dark matter and dark energy, identify countless instances of transient astrophysical phenomena and map Earth-threatening asteroids—if, of course, interference from satellite constellations does not scuttle its delicate work.

SpaceX’s initial efforts at mitigating the spacecraft’s impact involved launching a prototype Starlink satellite known as DarkSat earlier this year that features a black antireflective coating. Recent ground-based observations of DarkSat in orbit found it half as bright as a standard Starlink satellite—a great improvement, according to experts, but still far from what astronomers say is needed.

“I would not consider DarkSat as a victory but instead a good step in the right direction,” says Jeremy Tregloan-Reed, an astronomer at the University of Antofagasta in Chile and a member of the observational team that assessed the prototype. The team compared it with a typical Starlink sibling using a 0.6-meter telescope at the Ckoirama Observatory in Chile and found that although DarkSat’s antireflective coating rendered it invisible to the naked eye, it remains far too bright to avoid interfering with the Rubin Observatory and other major telescopes.

These results show that DarkSat is essentially a dead end, says Jonathan McDowell, a researcher at the Center for Astrophysics at Harvard University and the Smithsonian Institution, who has run computer simulations of megaconstellation effects on astronomical observations.  Nevertheless, he says, the investigation by Tregloan-Reed’s team is an important step. “This study is notable as one of the first significant observational studies of a Starlink satellite, something that the community is now organizing to do on a much bigger scale,” McDowell adds. He cautions that if the satellites continue to be launched without a fix, “the impact would be huge.”

In the long term, Rawls worries that as satellite constellations become more common, future companies may launch them without any attempts to compromise with astronomers. “It creates a lot of systematic errors…. It becomes kind of a mess,” she says.

SpaceX is hoping to eventually put 12,000 Starlink satellites in the sky, and last year it filed for permission to put up 30,000 more. With those plans—as well as Amazon’s Project Kuiper aiming for 3,236 satellites and OneWeb, a now bankrupt company recently acquired by the U.K. government, perhaps striving for 2,000—the scale of astronomy’s satellite-constellation problem will only increase.

While the dimming techniques tested by DarkSat are far from a sufficient solution, SpaceX has continued to develop other ways to further reduce spacecraft brightness. The company’s second attempt at a darkened satellite, VisorSat, uses a black sunshade to reduce light reflection. The first spacecraft with this design was launched on June 3. Astronomers are hoping to observe VisorSat and compare it with DarkSat once observatories reopen, following the COVID-19 shutdown.

Even before any detailed observations of VisorSat have been made, SpaceX seems to have doubled down on the new model. All the satellites in the two Starlink batches launched in mid-June and early August were VisorSats, with each carrying its own sunshade.

Astronomers are not yet sure whether darkening methods such as DarkSat and VisorSat are the solution. Of the SATCON1 report’s 10 recommendations, only one asks satellite operators to use darkening techniques. The others suggest deploying satellites in orbits below 600 kilometers to minimize their nighttime glare, controlling their orientations in space to reflect less sunlight, developing ways to remove their trails from astronomical observations and making their orbital information available so astronomers can point telescopes away from them.

By some mix of approaches from this menu of options, it is hoped, the problem can be managed. Even so, the advent of satellite megaconstellations may have made further degradation of astronomers’ view of the night sky inevitable.

For now Tregloan-Reed is comforted by the fact that SpaceX is taking the problems seriously. “The development of both DarkSat and the new VisorSat shows that Starlink appears to be dedicated to mitigating the impact” of its satellites on both astronomers and backyard stargazers, he says.

The spirit of collaboration at the SATCON1 workshop and the creation of the report that followed it are also promising, according to Patrick McCarthy, director of the NSF’s NOIRLab, which produced the report with the AAS. “I hope that the collegiality and spirit of partnership between astronomers and commercial satellite operators will expand … and that it will continue to prove useful and productive,” he said in a statement in late August.

SATCON2, the next workshop bringing together astronomers and satellite constellation operators, is planned for early to mid-2021. It will be geared toward tackling policy and regulation. With the prospect of hundreds of satellites being launched in the meantime, Rawls stresses the urgency and importance of the issue. “This is only going to accelerate,” she says. “And it’s a long-term precedent. It’s a question of what kind of sky you want your grandkids to have.”