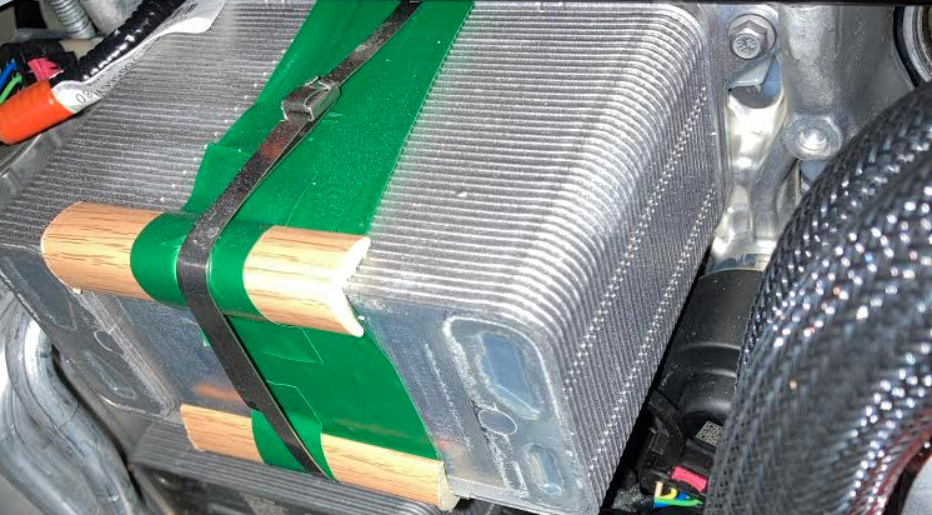 Tesla, like a lot of other companies, hasn’t had an easy time maintaining manufacturing supply lines during the pandemic. The shortages that have hit American groceries and other chains have been driven by sharp changes in consumer and business spending patterns, and it’s made even common items difficult to find in part due to a shortage of raw materials. Tesla Model Y owners have been surprised to discover that at least some of the vehicles the company is shipping feature an unusual substitution under the hood.

That part you’re looking at is the Model Y’s Liquid Cooled Condenser (LCC). Its job is essentially that of a heat exchanger, passing refrigerant through a large block where it transfers the thermal properties of the cryogen with other parts of the cooling system. This is just one small sliver of Tesla’s unique octavalve cooling system found in the Model Y that is responsible for conditioning the car’s cabin, battery, and drive unit simultaneously.

Image from a video by DÆrik

This is not how Tesla usually manufactures its vehicles. There are multiple YouTube videos showing clear plastic trim. The Drive asks how trim from Home Depot (more or less) wound up underneath the hood of a $55,000 car.

Oddly enough, Slate appears to have written an answer today. I admit, I’m the one joining these two pieces of information, but it makes too much sense not to mention it. According to this report, many of the shortages of goods in the United States are being driven by shortages of primary materials. Manufacturers are having problems sourcing aluminum because the shift in consumer buying patterns since March has tanked demand for beer kegs, but sent demand for aluminum cans soaring. These sorts of raw material shortages can prevent companies from shipping products even when they’ve got the rest of the components on-hand.

If we extrapolate a bit, it looks like Tesla turned to an alternative solution for a suddenly difficult-to-source part. This isn’t particularly surprising when you consider the alternative: Namely, not shipping $55,000 vehicles because you can’t find a five-cent molded piece of plastic. One can imagine Tesla Model Y’s outfitted with this particular fix becoming sought after in the future precisely because it’s an unusual example of how the company dealt with a supply-chain crisis. Imagine the oddity of some future reality TV show hosts carefully analyzing a bit of wood trim, trying to determine if its a “genuine” Tesla Model Y piece of wood, or a clever replica intended to look like cheap trim produced circa 2020.

This is a fix deployed underneath plastic that isn’t intended for customer eyes. It looks janky, but from a reliability perspective what matters is that it performs its function equivalently well. No one has commented that the fix is more likely to fail, and the folks that found it were working on other parts of the car at the time, so this doesn’t seem like a bad solution that needs fixing. It’s more a sign of how we’re all doing our best to deal with the pressures of the pandemic, including finding creative solutions to problems.

That said, I wouldn’t be surprised if Tesla got some requests to replace the dead tree version with something a bit sturdier. “Seasoned oak” is a lovely stain for the bathroom, but it doesn’t compliment the Model Y’s stylings all that well.