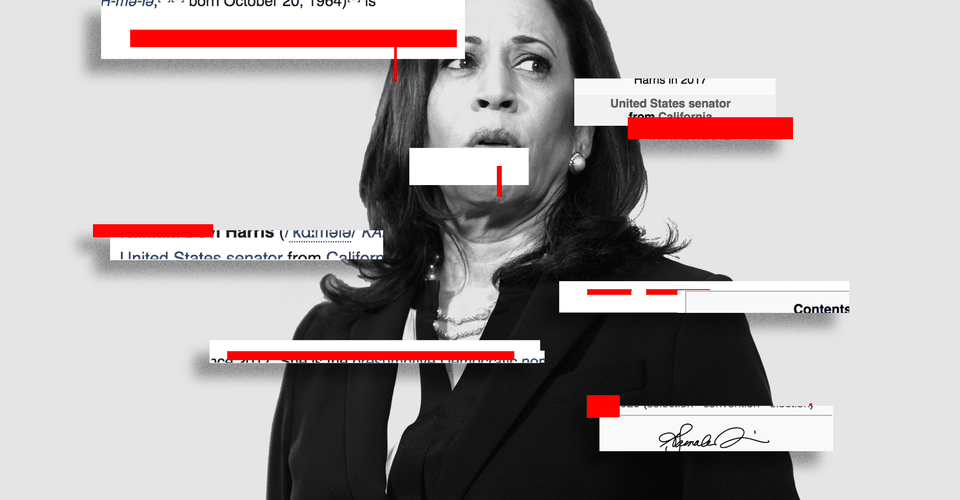 By Wednesday morning, the pro-Trump video blogging duo Diamond and Silk were claiming, “Kamala is not even Black. So you know when she talks about racism, that’s why she don’t care about it. She’s not even Black … I don’t know what she is.” And Newsweek ran an op-ed arguing, using a fringe legal theory, that Harris may not be eligible to be vice president.

The battles over Harris’s Wikipedia page played out primarily over the specific term African American. That debate began in earnest last week, when Harris was only a much-discussed potential running mate.

“How exactly can you describe someone with south-asian ancestry as ‘African American’?” one anonymous user wrote. “Does this term now mean ‘black’, ‘dark skinned’, or simply ‘non-white’? Please, this is disrespectful to people from the Indian sub-continent who have their own very distinct identities.”

Read: Kamala Harris’s nomination is a turning point for Democrats

“She identifies as African-American. End of story,” replied a user named Fowler&fowler, who frequently edits India-related articles on Wikipedia. “Please don’t rehearse tired old banalities about who is black who is African-American. Please also don’t imply (if you are doing so) for the hundredth time the other pieties about whether the Middle-Passage is a sine qua non for being one or another … By any definition, she is more African-American (in the traditional meaning of the word) than Barak [sic] Obama is.”

(Harris’s Senate bio describes her as “the second African-American woman and first South Asian-American senator in history.” When she was sworn in as California attorney general, her office described her as “the first African American” to hold the position.)

With Wikipedia’s article protection preventing them from making the edits themselves, a series of mostly anonymous users instead asked for Harris to be described as something other than African-American:

“Some information is wrong. She is not a black. Her mother is Indian, her father is Latino. She is not either black nor native American.”

“Harris is the second African American woman is wrong, she is Jamaican / Indian.”

“Kamala Harris is not African American as this states. Her mother is Indian and her father Jamaican.”

“She is of Jamaican decent [sic] not African.”

Wikipedia administrators and other senior editors have stood by the use of African American, noting the many years of news stories and official documents that have identified her as such. Wikipedia editing thrives on consensus, and amid all the debate, the consensus of editors was that a consensus had been reached. (The word consensus currently appears 49 times in the discussion.)