Warren Buffett’s Berkshire Hathaway has made more money on Apple in four years than either company was worth 20 years ago.

The famed investor’s conglomerate spent about $35 billion to acquire around 245 million Apple shares between 2016 and 2018. Its 5.7% stake in the tech titan was worth about $122 billion as of Friday’s close, meaning it has racked up an $87 billion investment gain to date.

Apple’s market cap plunged below $70 billion during the financial crisis, and only recovered to north of $87 billion in March 2009, according to YCharts. It has mushroomed more than 20-fold since then to a record $2.1 trillion on Friday.

Read more: Stocks are making their most extreme moves in 20 years — and one quant expert warns the COVID-19 crash was a preview of more ‘wild swings’ to come

The value of Berkshire’s Apple stake is striking because the iPhone maker is just one of 41 holdings in its stock portfolio, which was worth more than $200 billion at the end of June.

On top of its stock investments, Berkshire also owns scores of businesses including Geico, See’s Candies, and the BNSF Railway, and operates in multiple sectors including insurance, manufacturing, utilities, and retail. 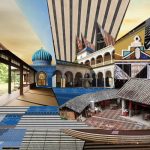