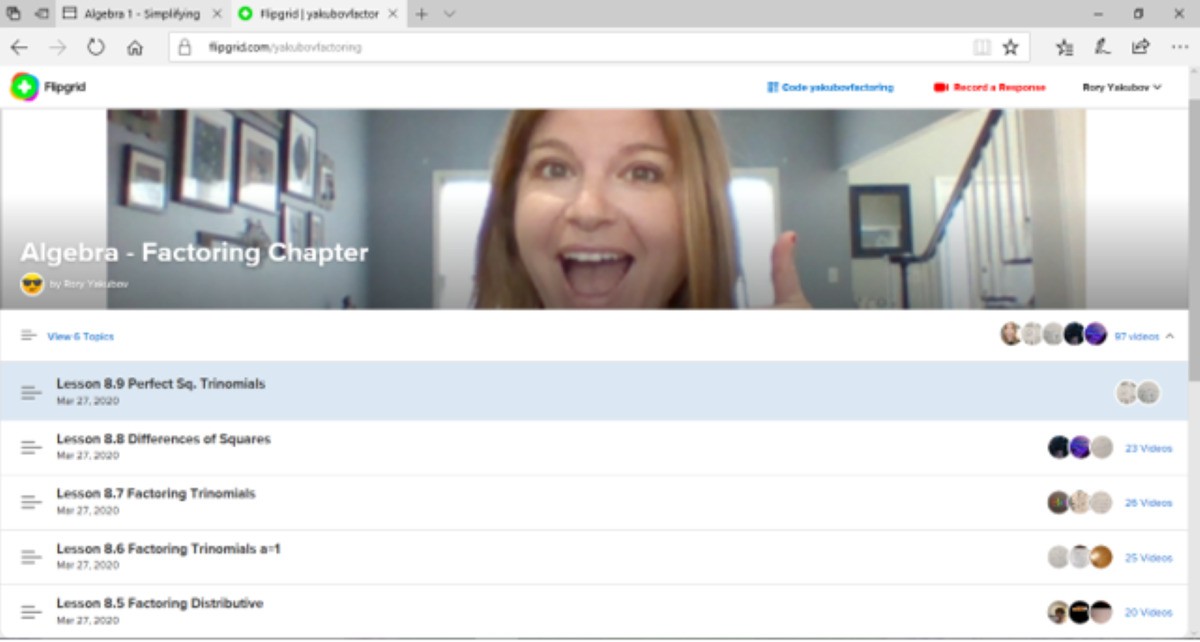 What remote learning will look like this fall in Meet, Teams, and Zoom

How each teacher and school district will use each tool may vary. But we’ve spoken with Microsoft and Google, and teachers who are using these applications, to understand what each “virtual classroom” experience will be like when kids go back to school this fall, and how it will differ from this past spring.

Signing up school districts and teaching students the ins and outs of their respective platforms is an enormous strategic win for tech platforms like Google and Microsoft. Both companies have rolled out a dizzying rush of new features to meet the urgent demands of these users.

Google’s traditional advantage has been in hardware. Its cheap, managed Chromebooks have served as a vehicle to install Google Classroom and Meet inside American school districts. Part of Microsoft’s benefit is that it can offer a powerful, integrated suite of applications, including Microsoft Office, Teams, and FlipGrid. Finally, there’s Zoom, the videoconferencing service that’s now become ubiquitous with video chat.

Google: Catching up in a big way

In New York State, Zoom offered a number of features that Google didn’t when the school systems suddenly flipped to distanced learning, according to Bill Vacca, Director of Instructional Technology at Mohonasen Central School District in Rotterdam, NY. But among Microsoft, Google, and Zoom, Google was the only company that had filed the requisite certificate to meet Education Law Section 2-d, which governs data privacy—which meant that the state adopted Google’s G Suite for Education, including Google Classroom and Google Meet. Though the others have now filed their certificates, that readiness gave Google a leg up.

Google’s ecosystem is based upon G Suite. Google Classroom provides a hub to direct students to specific tasks, which they can perform with Google Docs, Slides, Keep, and other applications. Meetings are conducted by Meet. Schools can choose from the free G Suite for Education, or else pay for G Suite Enterprise for Education, which adds more advanced features. (Google provides a detailed comparison chart of the two flavors.)

On Tuesday, Google will launch what the company calls The Anywhere School, to introduce Google Classroom’s new features for in-person and remote learning for the fall. Many of Google’s new Meet features will be familiar, as they were announced in June: a 49-person view that will debut in September, custom and blurred virtual backgrounds that can be managed by administrators rolling out in October, alongside breakout rooms and attendance tracking; plus Meet’s new integration with Google’s Jamboard digital whiteboard and more.

Google plans to announce a few new features as well for Classroom, according to Zach Yeskel, a product manager for Google. Improvements for the To-Do page within Classroom are being added to help see what’s coming up. As a hedge against first-day setup problems, students can be sent a link to join Classroom directly. New administrator dashboards will also be available.

For this fall, Meet meetings can’t be anonymous, and every attendee must have their own Google account. Teachers will be able to require that every student “knocks” to get in. If a participant is disruptive and is removed from the chat, they won’t be able to knock repeatedly to be let back in, a change from the spring. A “raise hand” feature is being added, with visual and audio indicators. There will be new “chat locks” and “present locks” to let the teacher manage the class, and a new “end meeting” control to prevent unauthorized chatting once the meeting ends. Live captions will be accessible. Transcription, though, is not on the agenda, and a Google representative said that there was nothing to announce.

At-home students can also take advantage of related Google apps and features. The Google-owned Socratic app can “tutor” students through a problem by taking a photo of it. Google is touting its “Family Bell” feature within Google Assistant as a way to stay to alert kids ahead of their next online class.

Mohonasen Central School District is going to offer a mixture of in-school and virtual learning. As of January, 40 million students and educators in the United States were using Chromebooks, Google says. “They’ve been the golden ticket,” Mohonasen Central’s Vacca said of Chromebooks, because they offer very limited features “that meet exactly what educators need.”

In Vacca’s district, each classroom will be equipped with a webcam in the front of the classroom. Although the implementation may vary from class to class, a hypothetical third-grade classroom in Vacca’s district will begin the day with kids coming in and opening up their Chromebooks, while a teacher makes sure they’re logged in and present. A teacher will open up a Google Slide, with the day’s agenda and a question of the day. Students will then open up either a Google Doc to write the answer, or just do it on a piece of paper, which can be shown to the Chromebook’s webcam via Meet.

(One weakness of Google’s ecosystem was that until Google’s Jamboard whiteboard was integrated, it was a challenge to write out the answers to math problems, Vacca said. Holding up a written answer to the webcam was also complicated by the fact that Meet reversed the image by default, a bug that was fixed in April, Vacca said.)

At lunch, students log off and eat privately. One of the restrictions Google imposes is that students can’t set up their own private Meet calls, Vacca said. Unfortunately that means that kids can’t enjoy a “recess” where they can hang out with their peers. “It prevents bullying, but it also takes away the ability to connect without a teacher there,” Vacca acknowledges. “That is something that can’t be replaced.”

One of the advantages that Google has, according to Vacca, is a leg up on asynchronous learning: YouTube. Instead of interacting live via Meet, teachers record YouTube videos and let students watch them on their own time. Even the P.E. teachers have access to Google Classroom. “The P.E. teachers are recording themselves—‘follow my lead!’” Vacca said. “The students are then recording themselves, sending that video file back, and showing off what they did.”

Grades will be recorded via the tools within Google Classroom, as they were back in March, with checkboxes showing students which assignments they’ve completed and turned in. A new app called Assignments will be provided to help out non-Classroom users. New metrics will be available to teachers, modeled after the metrics YouTube provides creators. There’s a social and emotional module in the works to help teachers support students further.

G Suite for Education even has an “originality” report, where a student’s answer can be compared to others G Suite has collected, in a search for plagiarism. Five originality reports are offered per course. If a school pays for the Enterprise Edition, Google will even compare answers in the classroom, looking for unauthorized student-to-student “collaboration” as part of a beta program.

Vacca has some concerns about Google’s solutions, too. In March, Google made the improved videoconferencing capabilities within G Suite Enterprise for Education available to the free G Suite for Education tier. The key feature, Vacca said, was the ability to record meetings and archive them for students to review later. But Google said it would end the program on September 30, just a short time after classes resume. Breakout rooms, too, are still a paid feature.

“What they have done is going to bite schools in the butt in the end,” Vacca says. “I wish they would at least make the recording feature available for the [free] Education package.”

As it turns out, Google will—sort of, Google said Tuesday. Premium recordings will remain in place within the free Education tier until a new “temporary” recording program rolls out. This will allow a meeting host to record and share the meeting within their domain for up to 21 days, but not download it.

Microsoft: A flood of new features, too

Before Google announced its wave of upcoming features, Microsoft had dominated the space with seemingly constant refreshes of Teams. Near the end of the school year, in March, Teams added real-time noise suppression and a “raise hand” feature, along with Zoom-like custom background support.

In June, after the school year ended, Microsoft tipped off what Teams for Education users will see in the fall: a 7×7 gallery view, breakout rooms, and a lobby for students to wait in before class. In July, Microsoft laid out even more Teams features.

Perhaps the biggest change for schools using Teams will be an optional auditorium-like “together mode,” which will coincide with the launch of chat bubbles and transcription services, which will roll out over the course of the fall.

Microsoft’s timeline can be vague, however. While the 7×7 gallery view in Teams is scheduled for August, other features, such as the emoji-like “live reactions,” are just coming “soon.”

Like Google, Microsoft offers a free tier of Microsoft 365 for Education with access to the online versions of Microsoft Office, plus 1TB or more of OneDrive cloud storage. If a school opts for a paid, premium tier, they can add locally installed versions of Office apps, schedule teacher meetings using Microsoft Bookings, and gain access to improved analytics.

Flipgrid, a short-form video discussion platform Microsoft bought in 2018, isn’t part of Microsoft 365, but it’s an important part of Microsoft’s education strategy. Teachers can post questions or topics, and students can respond via short videos. For most of these activities, however, students need a Windows PC.

Michael Salcito, the vice president of education for Microsoft, told PCWorld that educators saw student fatigue during the first run of distance learning in the spring. “We’re hopeful students are going to have much more confidence, with a more purposeful use of technology and a wider mix of learning techniques,” he said.

Though Microsoft now includes custom virtual backgrounds, there’s still something of a lack of personalization in the Teams experience. Salcito suggested students could make up for it in the physical world—sharing a stuffed animal or pet via a webcam, or snapping a photo on a lunchtime walk.

That’s a lesson that Rory Yabukov, a ninth-grade math teacher in the Old Bridge Township School District in New Jersey, has taken to heart. The district was on Teams even before the pandemic hit. Transitioning to remote learning was made far easier as students and teachers were already familiar with the Teams platform, Yabukov said. This fall, the district’s plan is to do a mixture of in-person and distance learning, with just an hour in the classroom.

“It’s a challenge to plan everything out,” Yabukov said. “This fall I’m going to try to make sure that because we have so much remote learning time that my classroom experience is more of a hands-on experience.”

Yabukov said she sees the Microsoft Teams chat window as a “perfect wall of conversation,” with the ability for her to begin conversations, and for students to initiate their own and chime in. “When I drop a formal assignment into Teams, they get a nice loving greeting from me, they’re getting a link to the YouTube video that I pre-recorded for them,” Yabukov said. “This is what I did in the spring, and will continue to do most of this in the fall.”

Yabukov said she uses Teams to drop in links to Quizlet, the popular quiz site, as well as IXL, another subscription education service. Teams, Yabukov said, makes it easy to integrate both services. And though Google owns YouTube, Yabukov said she considers the option to do prerecorded videos a valuable resource for her students to review on their own time, freeing up classroom time to be the equivalent of “office hours,” where students can ask questions. The Files tabs within Teams is where she plans to keep PDFs of her scanned notes, which can be printed out—and, in years past—glued into a student’s physical notebook and supplemented with handwritten notes.